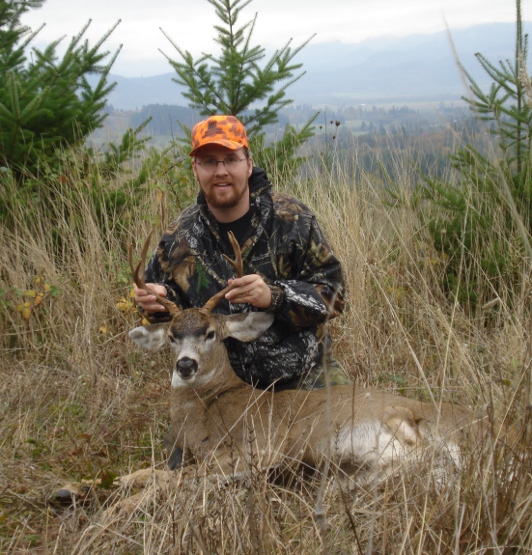 It was October 30, 2007. I walked very slowly and quietly through the woods . After about 20 minutes of sneaking around, and peering through the maple branches and blackberry vines, I found a place to sit down and rattle some horns.

I occasionally used my "Deer Talk, The Deer Stopper" bleat call. This was the second time I had stopped to rattle and call. To my dismay, I heard a very loud car slowly making its way up a nearby muddy road which was barely in view.

It sounded like the car had no muffler at all! I thought my chances of seeing any deer that morning had gone down the drain for sure. I was dressed in full camo except for the orange hat you see in the picture. I took off the hat and hid behind a tree, hoping the hunters in the car wouldn't see me.

I watched the old station wagon slowly drive by and out of sight, wondering how they expected to see any deer from the road in such a loud car. After a few minutes, the car came back by and I hid again.

I figured they were just road hunting and would leave the area. When I walked up to the road I almost decided to head back to my car and go hunt another area. For some reason, and almost without even realizing it, I crossed the road and began hiking up into a really good looking area of reprod, with trees four to six feet tall, tall brown grass and some blackberry vines.

It was very "deery" looking. Five or ten minutes later, I was crossing back and forth over the top of a little ridge to get a view from both sides as I went. Suddenly I saw movement up ahead to my left, between a couple of douglas firs.

It was a buck crawling on its belly, trying to sneak away from me! I couldn't believe it! All I could really see was a nice set of horns rocking back and forth as he crawled, then I caught a glimpse of his ears and back and a leg.

He was crawling like a dog crawls on its belly. I had read online that blacktail bucks

will sometimes do that. Blacktail bucks are very smart. I quickly shouldered my .243 caliber Ruger M77 Mark II and tried to find him in my Tasco World Class 3-9x40 Riflescope

but it was fogged up.

This is almost inevitable when you hunt in the rain soaked cascades of western Oregon with a scope that is not fog proof. I could barely make out the outline of the deer crawling away from me, so I put the cross-hairs on what I thought would be his vitals and pulled the trigger.

Such is the nature of hunting blacktail deer in western Oregon. You get one split-second chance... if you're lucky! I wasn't about to lose my only chance- I saw that the deer was still moving away from me, though now with a little more purpose, so I quickly went to bolt another round into the chamber... but in my excitement I wasn't operating the bolt correctly and it hung up for half of a second or so.

A blood-red rush of frustration went right to my face and a choice word started traveling to the tip of my tongue as I sensed that I was losing my one-and-only opportunity to harvest a buck.

Time stood still as it does only in these situations and finally I gathered my wits enough to operate the bolt and shoulder the rifle again (only a second or two had gone by).

I peered through the fogged scope and put the reticle on the middle of the buck's back and pulled the trigger again. After recovering from the recoil and blast of the shot I looked and couldn't see the deer, so I cycled another round, with a little more grace this time, put the safety on and started sprinting towards the place I last saw my quarry (about 75 yards away).

I dodged the douglas firs and bounded over fallen trees and ducked under blackberry vines as I went, down into a gully and up the other side (holding the rifles three position safety in the "safe" position with my thumb as I went).

As I came to the top of the little gully I caught movement out of the corner of my right eye and there was my buck! I finished him off and stood there in utter disbelief and barely controllable excitement, looking down at my beautiful trophy! If I hadn't been zigzagging back and forth across the top of that little ridge I would not have even seen the buck.

Sometimes it helps when you don't have a set plan in mind. The opportunity can come at any time and it hardly ever happens just like I think it will. To top it all off, I bagged my buck on the last day I planned to hunt.

By the way, I have since upgraded my scope to a Nikon ProStaff 3-9x40 Riflescope which is both fog proof and waterproof.

After field dressing my deer and dragging it down near the road, I loaded it into my Nissan Sentra and drove past some folks that were target shooting.

I found the scene comical and I chuckled in delight as I drove by, just imagining what they must have been thinking about some crazy road hunter, driving a Nissan Sentra on a muddy logging road. I'm sure they had no idea I had a nice three point blacktail in my trunk!