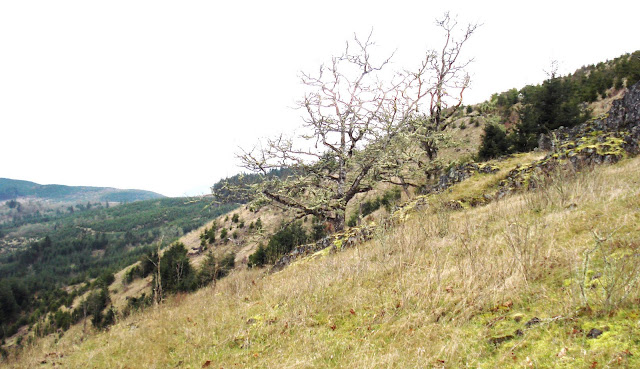 This is the hill I climbed on opening morning of antlerless deer season (photo taken January 2009).

I am all sore and beat up. I hunted hard all day yesterday. I was trying to fill my West McKenzie Antlerless Deer Tag. I was pretty confident that I would be on my way back home with a doe or a spike in the trunk of my Nissan Sentra by noon....

Not so fast there champ! I see deer almost every day that I hunt, but as I hiked and hiked and hiked around yesterday, I began to wonder if I hunt differently when I am hunting for bucks. I am pretty sure I do. In the back of my mind, I was thinking that I should be able to find a doe really easily, right? But I always see the does when I am hunting for a buck, and there is no hill that I won't climb nor canyon that I won't descend in the hopes of finding a big blacktail buck. So, I should put out the same amount of effort to find a doe. I thought about all of this as I hunted. I did hunt hard, but there are definitely some places I was unwilling to go to find a doe. A doe would have been a great blessing. It would have been meat that I would have really appreciated. However, I mean no respect to the animal when I say that I am simply not willing to climb into a clearcut, at a 60 degree angle, over fallen trees and rocks, twisting my legs in holes, and sliding down and landing on my elbows... all for a doe.

The weather was beautiful yesterday. I absolutely loved sitting at the bottom of a clearcut at first light watching, and expecting to spot a deer at any moment. I should have stayed there longer, but I felt that I needed to keep moving because the deer weren't going to be moving around freely with so many hunters walking and driving around on every road...

So, I hiked on, slowly, as quietly as possible, up the steep hill. I heard several gunshots during the day.

After a long, loooonnng hike, I was ready to road hunt. So, I went for a ride around the logging roads in my Nissan Sentra.

A Nissan Sentra is not designed as a hunting vehicle, but I have to admit that it did very well. I was able to clear several rocks and dips in the road with relative ease. It is very fuel efficient and quiet. It's too bad I can't have a truck right now (one that runs), but I can make due with my Sentra for a while longer I guess.

After my long hike, I was pretty tired, and afraid that if I got out and hiked much more, if I did get a deer down, I would have a very hard time getting her back to the road. So, I figured I would road hunt for a while until I felt like going on another hike. Several times I pulled over and took micro-hikes to glass clearcuts. I "kept my eyes peeled" at all times and was really, REALLY surprised that I didn't see one deer during daylight. In fact, the only deer I saw were next to the road in the dark on the way to my hunting area and next to the road in the dark on the way home from my hunting area. Go figure...

So, I did not fill my tag yesterday. I still have next Saturday morning, but seeing how it will be Halloween, I don't think I can justify going hunting until dark. Something about taking my five year old son trick-or-treating...

To be honest with you I was pretty mad that I hadn't seen any deer. I don't know why I had such a bad attitude about it. Part of the problem is that I have just been spoiled lately. I have now hunted a total of three days in the last two years and have harvested two bucks in those three days. I have also harvested a buck in four of the last four years. So, an antlerless deer tag should be no problem to fill in one full day of hunting, right? - Wrong. Especially with the attitude I was having (ok, it wasn't really that bad).

The good news is that I'm over it now, besides the sore legs and bruised elbows, and I am already anxious to get out again as soon as possible. The season ends on November 6th, so this upcoming Saturday will probably be my last chance.

When did I start feeling better about it all? Hmmm, I think it might have had something to do with supper tonight. Yes, supper! In preparation, I pulled two packages of backstrap out of the freezer and slowly defrosted them. Then I sprinkled some salt on them and rolled them in flour. Then I heated up some olive oil and fried them up...

And... when I bit into that first piece of meat, all the pain and frustration melted away and I savored the delicious, tender meat, and grabbed another piece, and another and another and gave a piece to my son, who was standing next to me and told him that "this is why I hunt." Yes, mule deer meat is definitely as good as blacktail deer meat!

It was delicious! Better than I remembered.

P.S. Oh, and the dude that got in his Ford Bronco and tried over and over and over again for about 10 minutes to drive up off the road into the trees like an insane lunatic... knock it off, dummy. That was annoying. What were you trying to prove? LOL!