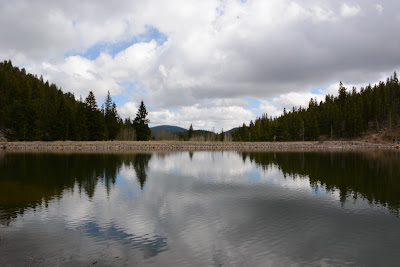 I’d like to start this post with a quote by Henry David Thoreau that goes, “Many men go fishing all of their lives without knowing that it is not fish they are after.”

Looking hard at the philosophical and psychological aspects of fishing, it’s hard not to question this statement and apply it to one’s own interpretation of outdoor recreation.

Though fishing is the explicitly mentioned topic of this quote, I would be hard-pressed to not take it as a metaphor for all forms of getting into the great outdoors.

A few months ago, a friend of mine and some family went on a short camping trip during a school vacation just to get out of the house and into the great outdoors.

Jackson Reservoir in Colorado is a prairie reservoir located in about as flat land as they come which implies that the howling wind racing over the land is going to be enough to drive anyone absolutely insane.

The week of this camping trip was no different and although our campsite was well sheltered, the shore site we were able to fish was on the windward side of the shore and so the wind buffeted us fisherman in a ceaseless gale blowing water and mucky weeds into our faces as we tried to cast.

Hoping for a reprieve during the first night, I suggested we return to camp and wait for dusk to fall to try an evening and a night bite during a time when hopefully the wind dies down.

It didn’t. The wind continued well into the evening and as we stood on the shore hours later with our gear in hand it began to look like a hopeless case for our meager fishing team. Just as we were leaving the situation with our tails between our legs, my friend spotted a small cove of rocks that were just large enough to block the wind should we choose to hunker down.

Now, I forgot to mention, the land we were on was a long rock pier that jutted way out into the center of the lake with short sloping sides of large boulders on either side.

One side was facing the opposite direction of the wind and so as the wind hit the pier, this section remained wind-free.

The question became how to stay warm if we decided to stay. Although wind free, the surface of the rocks was freezing cold and the temperature was dropping fast as the sun continued to set.

Then, to my great surprise, my friend adamantly stated we would fish no matter what. He suggested we tuck into the rocky area while encased within our sleeping bags and fish in a reclined position to hide from the wind.

Having no other option, we walked back to the camp, grabbed the bags, and huddled in interspersed down the bank.

When the night fell and the only light was from a dim, rickety old lamp that rattled and clanged behind us, the evening got mysterious and foreboding. It was near pitch black in our area with the exception of brief flashes of light from phone cameras and the lamp light reflecting off of rod tips.

In that darkness, the only thing a person could do was think.

The wind prevented us from any conversation and our phones lacked service to be of any use.

It was mesmerizing for a while to raise your hand a foot or two above your head and feel the wind suddenly sweep it away. Then bring it back down into the pure calm of the cove and into the warm sleeping bag.

These little pockets of serene calm amid the hectic, tumultuous rigors of life and nature are the things that I find to be far greater than anything I could catch while out fishing.

Whether it be a simple escape from the daily lives we lead or a cave amid a rainstorm while out hiking, the outdoors offers a simple way to slow down and live life deeply.

I don’t doubt that Thoreau felt that the outdoors was as if returning to a way of life in which he received much more than he could have ever asked for.

In my life, that’s my interpretation of outdoor recreation.

Let us finish where we ended with another quote this time by John Muir:

"Thousands of tired, nerve-shaken, over-civilized people are beginning to find out that going to the mountains is going home; that wildness is a necessity; and that mountain parks and reservations are useful not only as fountains of timber and irrigating rivers, but as fountains of life."

And catch the feeling you don’t even know you are looking for.

by Timothy
theoutlifeblog.com
Email ThisBlogThis!Share to TwitterShare to FacebookShare to Pinterest