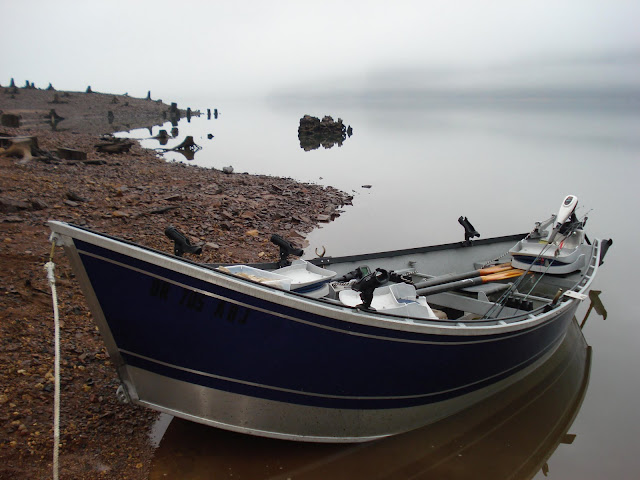 The great weather has turned on the fishing fever. Saturday January 23rd was a beautiful day here in Albany, Oregon. I didn’t get to go fishing that day, but I knew that the time had arrived to go and purchase my angling license and combined angling harvest tag. So, on Monday January 25th I went and complied with that requirement.

Then, I had to determine where and when I would go fishing. At first I was thinking maybe steelhead on the Alsea River, then I thought maybe I’d try to take some steel from the North Santiam River.

After consulting with my favorite fishing buddy, my brother, that lives in Springfield, and the Oregon Fishing Forum, my focus changed from steelhead to trout and landlocked Chinook salmon.

The reports on the Oregon Fishing Forum were very favorable for Lookout Point Reservoir near Lowell, Oregon. We thought we would give it a try. Why not, my brother had caught one landlocked Chinook, (also known as “chinokanee”) on Wednesday. It was a little change of pace for us, we had never fished for landlocked Chinook before.

So, I met my brother at his house at about 7:30 AM on Saturday January 30th. He had the drift boat hooked up to his rig and we were off shortly thereafter, with high hopes of some good fishing.

We arrived at the boat ramp and shortly thereafter launched the boat. There was only one other boat in sight! It was a beautiful and calm morning. The only drawback to the weather was a bit of fog, but we weren’t complaining…

As usual, it took me a good 15 minutes to rig up my gear. In the excitement I am always getting things tangled up. Eventually, I was successful in tying an Orange Dick Nite Spoon to my four pound monofilament line. Then I attached three large split-shot sinkers to the line, about 18 inches above the lure.

To be totally honest with you, I didn’t have much faith in that little orange spoon, so I started rigging my trusty old fly rod with a black bead-head woolly bugger, just in case I didn’t get any action on the Dick Nite Spoon.

We crossed the lake and I wasn’t paying due attention to my rod, when all of a sudden my brother says “nimrod243, you’ve got a fish on!” Much to my surprise I looked over at my rod and it was doubling over nicely, so I grabbed the rod and reeled in a beautiful 10-incher. 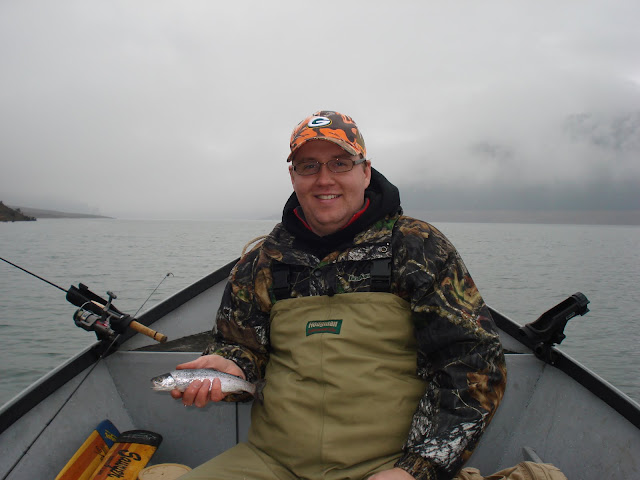 We speculated as to whether it was a rainbow trout or a Chinook/rainbow hybrid (I don’t know if they do cross breed or not). It’s tail seemed to be a little more forked than your average rainbow’s. I personally think it was a regular rainbow trout, but regardless of it’s genetic origin, it was my first fish of the year and the new decade. What a happy day!

Not long after that we began to mark fish on the fish-finder. These fish were hugging the bottom between 50 and 80 feet. We spent quite a while trolling back and forth over them,trying different tackle and techniques, without any strikes.

My brother was trolling some flashers and a red Wedding Ring Spinner, topped with a piece of worm. We were messing around and enjoying ourselves when he said, “Oh man, I just had a hit! He hit it hard!” But the fish was gone…

We fished on for a little while longer and I looked over at my brother’s rod and it was bending over real nicely. I yelled out “Bro, you have a fish on!” I could tell that it was a big fish by the way the long steelhead rod was bouncing under the variable pressure. My brother reeled it in and I netted a very fat and very healthy looking 15 ½ inch rainbow trout! It had a beautiful pink-ish-purple glow down it’s sides and it’s pupils were very large. Were so excited, we gave each other high fives and hooted and hollered. 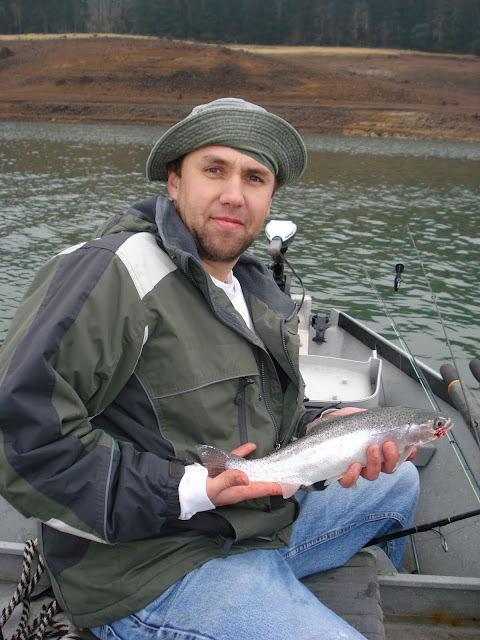 At this point we were elated. Our luck had been better than we had hoped.

We continued trolling along for a little bit and after looking at the time, we decided we had better cross the lake and fish along the opposite bank on our way back to the ramp, since we had to be back in Springfield by 2:00 PM.

I Landed three small Chinook on our way across the lake and my brother landed one...

Long story a little longer, we caught a total of eight fish. We released one that was only 7 ½ inches long and kept the rest.

I was pretty impressed with that little Dick Nite Spoon and the fish at Lookout Point Reservoir. I’ve never caught so many Chinook in my life. I will be stocking my fishing box with a few variations of the lure and trying them again in the future.

Thanks for a great day on the water, bro.

Oh, how the serenity
and placid water soothes the eyes,
stretching into infinity,
under grey and foggy skies.


The boat glides silently,
every image reflects so clear,
then my rod tip dances violently,
with my first fish of the year!