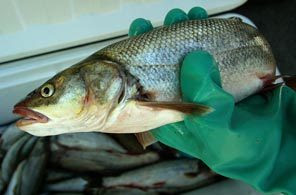 Okay, I know what you are thinking... it wouldn't be worth my time to drive to the Columbia and fish for bounty. Well, tell that to Nikolay N. Zaremskiy of Gresham, Ore., who, according to the Seattle Times ,was paid $57,772 for catching 7,015 Northern Pikeminnow (NPM) in 2008. How about David R. Vasilchuk of Vancouver who took second with $44,608 and 5,185 fish. Those figures represent fish caught during the open season, which ran from May 5th to September 28th, 2008. That's more $$$ in less than five months than I make at my full time job in one year! The 2009 season for the fishery will start May 1, 2009 and end September 27, 2009 and will pay between $4 and $8 for each fish caught in the Columbia and Snake rivers. The only drawback is the fish must have a total length greater than or equal to 9 inches and you have to catch at least one hundred fish in order to get paid. But hey, $400 doesn't sound bad for 100 fish! As an added bonus, special tagged NPM will be worth $500. Everyone comes out winning (except the NPM); the bounty fishers have a great time catching some nice sized fish (not to mention the potential for big $$$ in their pockets) and the salmon/steelhead benefit from the program as well. Last year the predation on juvenile salmonids was estimated to have been cut by 37 percent. In 2008, nearly 160,000 NPM were caught. We should soon see the benefits of those efforts in increased salmon and steelhead numbers. I'd say it just may be worth making a trip to the Columbia! If you are a beginner NPM fisher please visit http://www.pikeminnow.org/index.htmlfor program information, rules and regulations, etc.