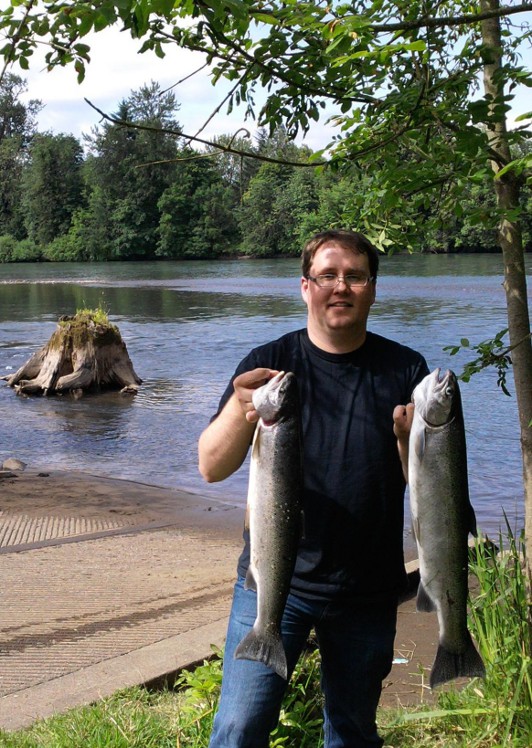 My alarm woke me up from a deep sleep on the last day of June. I looked at my clock in shock and confusion as I made out the 4:00 am on the screen. But within a second, a happy thought ran through my mind-

"You don't have to get up this early to go to work today. You set the alarm for 4:00 am so you could get up, get ready, and be at your brother's house by 5:30 am, to go fishing for summer steelhead on the Willamette River! Good chance you are going to catch a fish or two!"

I sleepily got ready as quietly as I could, to avoid waking up the Mrs. Then I hit the road, still trying to shake the sleep from my mind. I was sure it would be a beautiful morning, and I was looking forward to my first steelhead fishing trip of the year.

When I arrived at my brother's house, I saw that he was ready to go, with the boat hitched up to the truck as he had promised. I put my things in the boat and jumped in the truck. Within a few minutes, we were at the boat ramp launching the Diamondback Drift Boat.

We were on the river a few minutes later. I stood up in the front of the boat and cast a fly as my brother rowed up river to one of our favorite spots.

There was no action on the fly, which prescribed a change of technique. We quickly changed rods. We had two rods rigged with black divers with yellow eyes and red Guide's Choice Coon Stripe Shrimp for the bait.

We let the line out of the reels and positioned the divers and bait at about 30 - 40 feet behind the boat and put the rods in the rod holders. This gave us a moment to take in our surroundings.

The river was beautiful in the low light of the morning, flanked by the tall green trees along each bank. It's dark emerald waters continuously flowed with invisible power, holding the hope of our hearts in it's mysterious and magical depths.

About 20 minutes into our drift, we had a take-down. I quickly lifted up the rod and felt for the fish on the end of the line, but there was nothing. It was a little disappointing. But it was early in the day and we had already seen some action. That was the glass half-full perspective.

We re-baited that rod and continued fishing. It wasn't but 15-20 minutes later that we had another take-down. This time I could feel the heaviness of the fish at the end of the line, with it's powerful head-shakes and throbbing tail. I gave the rod a little tug to set the hook. A second or two later the fished thrashed at the top of the water!

This one came to the boat fairly quickly. My brother netted it for me and I patted him on the back, thanking him for helping me get my first steelhead of the year.

As my brother always does, he snipped the hook off the end of the line and set it up with a new hook and leader. Steelhead have very small, but very sharp teeth and they may have nicked the line. Better safe than sorry. This is the kind of mindfulness that is necessary to help raise the odds of netting your steelhead.

After re-tying and threading a new coon stripe shrimp onto the hook, we were back in the water, ready for another one. It was early in the day and we already had two take-downs with one fish in the boat. If we kept up that rate, we were going to do very well!

It wasn't but 20-30 minutes later, we had another take-down. I lifted up the rod and felt the fish immediately.  This one was a little heavier. I set the hook, and this fish insisted on swimming to the bottom of the river with all it's might. This fish was strong.

I told my brother, who had the net waiting for me, that I was having a hard time getting him to the boat. He reminded me to take my time and enjoy the fight.

Of course I had been enjoying the fight, but it was a good reminder. I had been so intent on getting him to the boat... Now I relaxed a little and tried to enjoy the moment for all it was worth.

Eventually the fish came to the net. It was about 27 inches long and a bit fatter than the first one, which was just over 26 inches long.

We continued to fish for about three and a half more hours. We had one more take-down that didn't produce a fish.

It was a great day of fishing! We had been greatly blessed and left the river two happy fishermen.