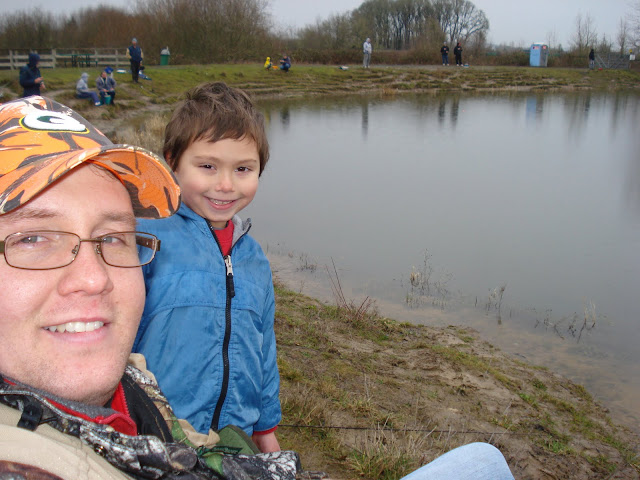 Went to E.E. Wilson Pond on Saturday Morning with my son. We heard that it had been stocked pretty heavily for opening weekend (February 1st). I had hopes of catching a few trout, but wasn’t expecting too much because I have never had much luck there from the bank. It wouldn’t be possible to fish from my float tube, seeing how my little fishin’ buddy was taggin’ along.

Made the half-mile walk through the E.E. Wilson Wildlife Area and plopped our camp chairs down in the mud on the bank under a light drizzle.

We were able to confirm that a stocking or two of rainbow and brook trout had taken place recently by observing several fellow fishermen pulling in some nice, fat ones. The action was sporadic at best.

We faithfully fished PowerBait about 3ft off the bottom (so as to get the bait up above the weeds) and I tried a black bead-head woolly bugger on my fly rod without any luck.

We didn’t get a single bite, but my son had a great time running back and forth in the mud and hopefully not driving the rest of the folks crazy.

Need to get back there on my float tube soon.

nimrod243
Email ThisBlogThis!Share to TwitterShare to FacebookShare to Pinterest