Meat in the Freezer 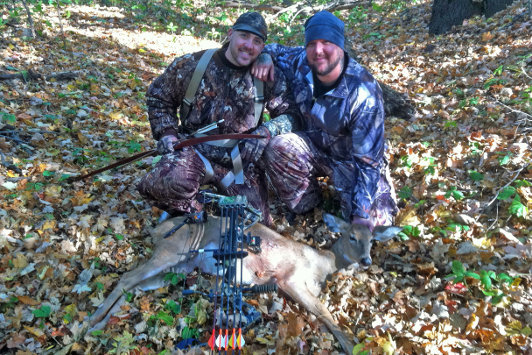 I smiled as I watched the two squirrels fight for the coveted walnut. Even though dozens of other walnuts were lying all over the forest floor, these two chose to fight over the same one, kind of like my two dogs at home fighting over the same bone. All morning long, I had considered targeting one of the squirrels with my bow and arrow, but I was in the hunt for deer and I didn’t want to mess that up.

I hadn’t seen any deer yet that morning, and I was getting cold, so squirrel stew was sounding better with each passing moment. As I thought about the possibility of a ten yard shot on the closer of the two fluffy tails, I sensed movement to my left.

Slowly turning my head, I saw a very large mature doe scent-checking the area before stepping into my shooting lane. She knew that something was amiss, but hadn’t yet figured it out. If she would just take two more steps, I would have an easy shot and there would be meat in the freezer. Her nose was up in the air, tail twitching, front leg poised to stomp in alert. She had definitely picked up enough of my scent to be concerned, but not enough to bail out - yet.

As I watched her, I heard leaves crunching behind me. Shifting my gaze further left, another doe stood partially obscured by a small tree. She was only ten yards away, and didn’t have the concern the older doe had. I still wanted the old doe but either would beat squirrel stew today. The old doe was still not feeling good about the area and started to lightly stomp the ground in protest.

Knowing I was getting close to “go time”, I stood up and got in position for a shot. I was now convinced that the old doe wasn’t stepping out into the shooting lane so I focused on the closer doe. Even though she was somewhat obscured by a tree, I saw that I had a window about six inches square to get the arrow through for a perfect quartering away shot. On the practice range, I can make that shot all day but in the woods shooting from a stand, I was much more cautious. All I needed was another step forward from her to have the perfect shot.

Mama doe was getting more nervous by the moment and decided to make a hard left turn away from me rather than stepping into the open. She certainly hadn’t gotten old by being stupid! As she took off, I looked back at the younger doe expecting her to follow, but she didn’t. She seemed content to stand there watching mama run away. Come on, one more step, just one more step! I thought to myself. I waited what seemed like hours but that step just wasn’t going to happen.

Out of the corner of my eye, I saw one of my squirrel friends run across the forest floor and up a tree close to me. It jumped on a limb and ran to within five feet of me, puffed out its tail and started barking at me with all of the volume it could muster. I watched in horror as the doe turned her head and looked right at me! I was totally busted!

I quickly focused on getting my sight pin steadied in that little shooting window and squeezed the trigger. There was momentary pandemonium as the deer kicked its rear legs high in the air, hitting the tree branches, and ran about thirty yards to my right. The blood on her side proved to me my shot was right on. She stood still for a few seconds, then fell and rolled down the hill away from me. After what felt like hours of build-up, it was over in just a few seconds.

I sat down for a second to let my nerves settle and to take in all that had just happened. It had been a great morning and there was relief that there would be deer meat in the freezer. 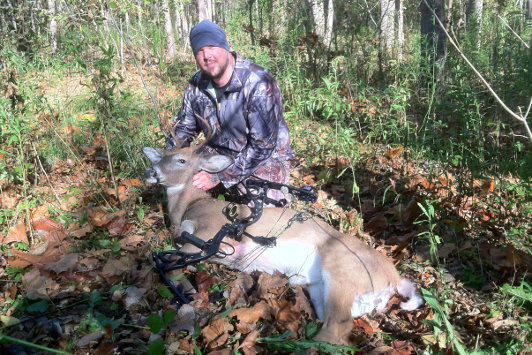 I texted my two nephews, T.J. and Josh, who were hunting about a quarter mile north of me. To my delight, I found out that T.J. had arrowed a seven pointer earlier in the morning. He was becoming quite the deer hunter and I was proud of him. It was truly a blessed morning, I thought, as I climbed down to go meet them.