My Biggest Fish Ever!

Steelhead. A fish that is common to the rivers of the Northwest. The steelhead is basically a rainbow trout hatched in a river. After a short time the steelhead smolt makes its way down to the sea. If it survives the journey and a year or two at sea, it returns to the river as a large and strong adult steelhead, having feasted on many nutritious meals in the great blue sea. Amazingly, the steelhead may return to the same underwater gravel bed where it was hatched. There it spawns to complete the cycle. The steelhead is an anadramous fish, like a salmon.

They call it the “fish of a thousand casts” because it is not an easy fish to catch. I had only caught two such fish in the last 12 years.

The story begins with me sitting on the couch in my home at about 5:30 pm. I was talking to my brother on the phone. He made the invitation and my decision was made. Though the sun would soon be setting I would drive an hour and join him in his drift boat on the Willamette River.

We launched the boat at 6:45 pm. It was going to be a short evening “drift", but the summer evenings in the Northwest are long and magical. We were both filled with anticipation.

My brother’s hands developed calluses on top of calluses as he rowed his drift boat upriver to get to the preferred fishing holes. It was an arduous task.

As expected, there were a few other boats on the river, so we adjusted our plan accordingly. As soon as we reached our destination, we quickly rigged up our divers and shrimp and tossed them over the edge of the boat. We slowly let out line until our bait reached an adequate distance behind the boat, then placed the long rods in the rod holders.

We fished and talked, enjoying the beautiful sunset over the river. Ah, the beauty of it! We were enjoying the evening, but it started to look as if it would be a fish-less one. Not a big deal, the time had been well spent.

I looked over my left shoulder, slightly upriver, and saw a pretty good sized stick floating by. I looked back at my rod and breathed in the beautiful scenery once again, not thinking much of the stick.

My brother saw it too. Recognizing it was more like a small tree, he began maneuvering the boat to keep from snagging my fishing line. He then yelled out for me to grab the fishing rod to help him avoid the snag.

As I reached for the fishing rod it suddenly began to shake and bend with wild animation! I had a fish on! Strange timing.

The fish made a couple of powerful runs, dragging line out of the reel- the familiar screech of the drag buzzing in the air.

I will never forget the image of the fish making a huge wake as it swam just below the surface of the water, out towards the center of the river. That sight alone was worth making a thousand casts!

The fish headed down river, back toward the ocean. I suddenly felt nervous, thinking I would lose the fish. Instinct kicked in and I pulled the rod tip over to the side to get control of its massive head. Shortly thereafter I had the fish on the water's surface. I pulled it right into the net, which my brother held. Our prize was secure!

I was so excited that I almost knocked my brother in the water giving him a big hug. I felt bad that my excitement put his life in danger. It was a sobering moment, but we quickly recovered and snapped this photo. 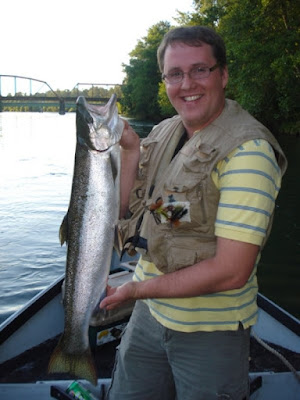 So, there you have it- the story of my biggest fish ever. It measured 32 inches and weighed 12 pounds.