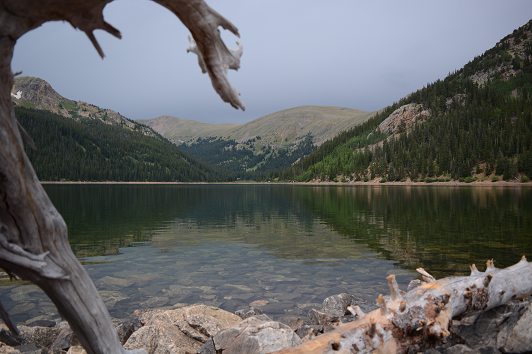 There’s a fishing story in my family that is the tale to tell when reminiscing of old lakes and past rods.

During the months after ice out, Lake Trout will swim up out of the depths they normally hide in and hunt the shallow water in search of young rainbow trout. It’s during this time that shore fisherman can test their tackle against some of the hardest fighting fish that freshwater has to offer. Being so carnivorous, the standard bait for lake trout is chunks of cut Sucker meat lashed upon a treble hook. The meat is large and heavy enough to be casted far distances without the use of any extra weight.

Fishing in this way means constant attention to the rods because these fish pick up the meat and tear off towards the darker water. It’s easy to imagine the small whales perusing down the shoreline just out of sight of our eyes. Once in a while, one of them will cruise down right in front of us and elicit shouts of excitement. These shouts grow louder when the fish fly through the water like gray torpedoes after schools of baby trout. Their huge toothy mouths open wide and completely engulf their prey. It’s amazing to see the few moments it takes for one more fish to be taken out of the pool.

It was on a hunt for these fish where the legend began. I was young. Young enough to tangle my line into knots even Houdini couldn’t escape. Inevitably, my father would walk over and proceed to untangle whatever mess I had made with exclamations of “How did you manage to do this?” coming from his lips.

During the entire trip everything had gone smoothly. We each had a few fish to our name and the weather was offering the perfect conditions to peer through the water. My family had decided to join my father and I that day but they wandered off through the woods surrounding the lake and left the fishing to the two of us.

Normally, my approach to fishing is to have one bait rod sit on shore and then I take a lure rod and walk the shoreline nearby. When fishing high mountain lakes, my lure rod is inevitably my fly rod and so on this trip I casted an Elk Hair Caddis to rising trout while I kept a careful eye on my rock weighted rod. When a fish struck, I’d fly back over and set the hook.

As the day went on we had only managed decent sizes of fish mostly within the 16 inch range. None yet had surfaced that would pull line out in screaming runs.

A period of time passed where the sun was beating so strong that it pushed the shallow fish deeper into the water. We chased them down with further casts but the catching of them had considerably become less frequent. I contemplated checking my bait for the fourth time and as I reeled in, the line suddenly stopped. I tangled it.

I called to my father who had been in the midst of reeling in his own bait and he set his rod down over a bundle of coiled line sitting on shore.

He teetered among the rocks toward me and took the rod from my hands to untangle the mess I had made.

Suddenly, there was a frantic clattering of rocks behind him and he jumped in surprise enough to drop my rod and sprint to his. The coiled line was whipping out into the water at lightning speed and the rod went with it moments before my father reached it. He took several frantic steps into the water before running back out and letting out a groan.

I ran up the sloping hill and perched on a rock so I could look out further into the lake.
There, in the deeper water, was the slender shape of a white rod being pulled steadily through the water and within moments it was swallowed into the depths.

We never did see that rod again.
Email ThisBlogThis!Share to TwitterShare to FacebookShare to Pinterest