A perfect fall morning saw me out with my nephew for a whitetail hunt.  The weather was cool but sunny with a slight breeze that was perfect for my stand set-up. The leaves were gently falling and life was good. It, in my opinion, is the perfect time to be in the woods.

My nephew, Jake, is an accomplished bow hunter who has harvested several deer and whom I feel safe and confident being in the woods with.  We were both excited and nervous with anticipation.

As the morning wore on, however, my anticipation turned to frustration as the woods seemed completely dead.  Not even the pesky squirrels were out and about. A groundhog who has a den near my stand didn’t even show up to say hello.

Late in the morning, I decided to give Jake a call to set up a deer drive on the other end of the property.  Just as I was ready to dial his number, I saw two deer moving toward Jake’s stand.

Within seconds, I heard the release of a bowstring and the sounds of chaos as the two deer bolted.  One headed directly toward me and got within about twenty yards before slowing down.  Its beautiful head started to droop before it collapsed on the forest floor.

In a matter of seconds, a frustrating hunt had turned fruitful as my nephew had collected the first doe of the season.

To make things even better, Jake’s wife was within days of delivering their firstborn, a beautiful baby girl who would be named Annie.  A freezer stocked with deer meat would do their young family a world of good.

The second doe had headed off in a different direction but I soon noticed it was circling back toward Jake’s doe.  Slowly it edged up to the doe and sniffed the arrow entry wound.  Then she raised her leg and kicked the dead doe three times as if trying to wake her up.

Seeing that the doe wasn’t going to move, the second doe began wandering away but closer to my location.

Within moments she was standing quartering away in an open shooting lane fifteen yards away.

My aim and release felt perfect but I heard a loud thud as the arrow sped toward the target.  My heart sunk as I thought I must have hit a previously undetected tree limb in mid-flight.

At the sound, the doe bolted away from me, eliminating any ability to get a second shot.  As I watched her, I noticed that her tail was held straight down rather than flagging alarm and I began to wonder if I had hit her after all.

In a few seconds, I was astonished to see her go down, only about twenty yards from the point of impact.

My legs got weak as I began to realize that my apparent miss was indeed dead on the mark and two freezers were going to be stocked with tender nutritious doe meat. 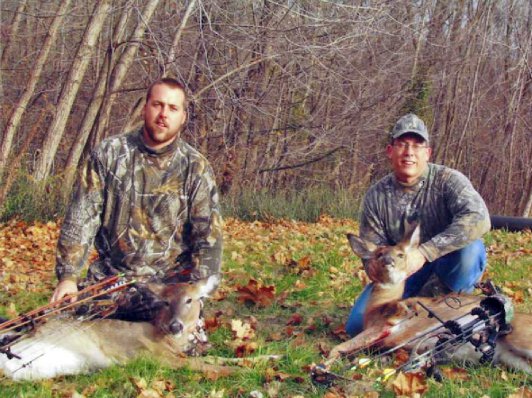 I have had many hunting adventures that I considered a success even when no game was taken, but it is always satisfying and rewarding to use an archery deer tag.

It is even better when we both get to do it on the same day. I don’t necessarily believe in luck or superstition, but there is no doubt that my hunts are blessed when my nephews are there.

This day just happened to be the third time in five years that we both took deer on the same day hunting together. That’s what I call hunting success!

Please visit Taking a Walk on the Wild Side to read more excellent articles by Darren Johnson. Darren is also an excellent photographer.

Editor's note: Darren is another winner of a Blacktail Antler Pen from S-Man Pens and Antlers!