The One That Got Away!

Okay, so I had a few days off last week, and on Friday, June 18th, I took my son fishing at our normal spot at Foster Reservoir. I was just hoping to catch a few stocker-sized trout as we always do there, right?

I rigged up my son’s rod first with two split shot sinkers pinched onto the line about 18 inches above a size 18 treble hook with some orange PowerBait; tossed it out and we were good to go.

I was thinking it would be nice to catch a couple trout on a Panther Martin spinner, since it has been so long since I have had any good spinner action with the rainbows. So I started casting, but a few minutes later, my son had a fish on! He reeled it in and I was pretty surprised to see that I was a very nice and fat rainbow trout! This was bigger than I am used to seeing at Foster, with the exception of those fish we caught last fall at Foster.

Suddenly, the PowerBait rig was calling my name and the romanticism of catching rainbows on spinners left me altogether in an instant. “Pretty typical,” I though to myself as I tied a treble hook to my line, “he always has to catch the biggest fish!” The thought hadn’t even crossed my mind that we might catch even bigger fish that day.

I cast out my line, and for the next hour or so I was busy either reeling in fish , yelling at my son to watch his pole, unhooking his fish or… you get the picture, the fishing was pretty good. We even had “a double” at one point.

Then I reeled in particularly nice fish and I thought, “Finally the old man out-fishes his son. I got the biggest fish of the day!” I didn’t say that out loud of course, though my son can take it was well as he can dish it out. 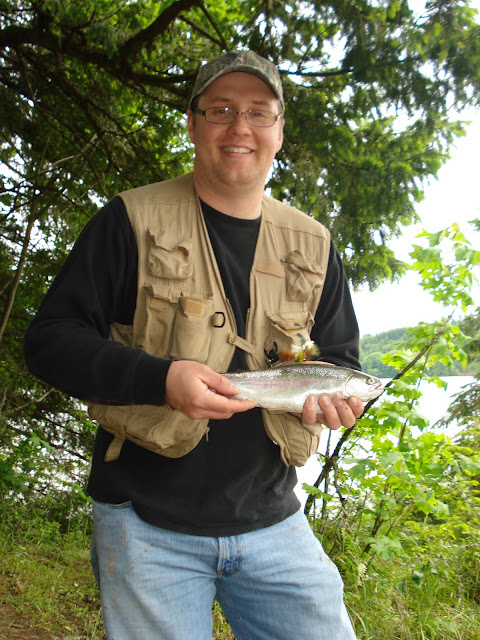 Well, it turns out that I spoke too soon. Just a few minutes later, my son reeled in an even bigger fish. These were particularly FAT fish as you can see in the photo below. 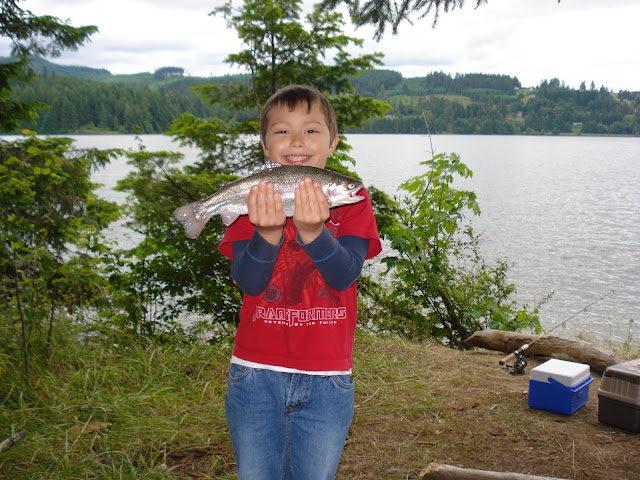 I wasn’t complaining, though. In fact I actually mentioned to my son, “This is awesome, the fish just keep getting bigger and bigger.” Honestly, though, I didn’t think we would “catch” any fish bigger than this“hog.“ And, in fact we didn’t.

But that’s where the story of “the one that got away” begins.

I was grabbing something to eat out of our lunch box when I looked over at my rod and, sure enough, I was getting another bite. I didn’t hurry myself, I tend to approach bait fishing with a tinge of a lackadaisical spirit nowadays, meaning I prefer to let the fish begin to actually digest the hook before I pick up my rod.

With a smirk of contentment on my face I closed the lid to the lunch box and moseyed over to my pole and gave it a good solid yank to set the hook, probably unnecessary, but satifying nonetheless. Indeed, things were feeling quite solid. I was a little unsure as to what was going on at the other end of my line. Momentarily I thought maybe the fish had wrapped the line around a snag on the bottom of the lake, but as soon as I felt an impressive “head shake,” I knew I had a good sized fish. The fish grew in size in my mind's eye as I brought it nearer and nearer to the shore and the pressure on the little trout rod continued to increase.

Now, admittedly, I kept uncharacteristically calm until the moment I actually saw the fish flash under the water… WHOA this was a big fish!

I decided I better jump down off the four foot tall bank onto the water’s edge so that I could beach this whale. Well, as soon as I did this, of course the fish put on a death fight, splashing water loudly with it’s powerful tail in a surprising fury. I feared my four pound test monofilament would break at any moment. I watched in despair as the fish wound itself around a stump at the water‘s edge. I quickly went into steelhead fishing mode and loosened up the drag as the fish began peeling line off my reel, making the drag sing it’s unique melody. Miraculously the fish was free from the snag, peeling more line off my reel. I was wading in the water now, determined to do everything in my power to land this fish. Okay, I made it through that steelhead-like run, so I began working the bruiser over to my right side where I hoped to beach him.

Slowly but surely I worked him closer and closer. Apparently it was too late when I saw the log jutting out into the water. In that split second, I thought “you better get him around the end of that log or you are going to lose him.” It was one of those situations where the brain calculated and body failed to coordinate the necessary evasive maneuvers.

With a bone-headed look on my face, I continued pulling with blind determination, tongue hanging out, slobber running down my chin, I watched that fish’s nose bump right into the end of the log, and in a BIG SPLASH he was gone! I wanted to cuss and cry all at the same time. It was a fish of a lifetime, and I had blown it.

Luckily, I remembered that God and my son were watching, and I held back the foul language and only a slur of incomprehensible guttural noises escaped loudly from deep within my belly, everything physically working in slow motion, my mind racing. I quickly appraised the therapeutic value of breaking my fishing rod into several pieces, but luckily I recovered again and discarded the idea immediately, opting to simply consider myself lucky to have had the experience just as it was.

Turns out the boy out fished his old man again. Somehow, I don’t see this trend changing any time soon.

P.S. Oh, and just for the record, I am pretty sure he was pushing a heavy 20 inches.