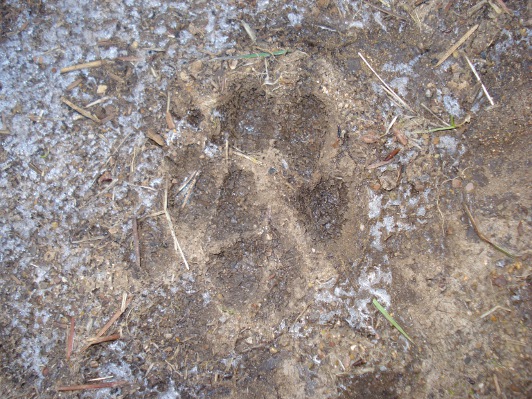 Having recently purchased our 2009 hunting licenses, my buddy SM2 and I were out on January 19, 2009 (Martin Luther King Jr. Day). We were in one of my favorite spots by Brownsville, Oregon. We were hoping to find a coyote, or some grouse, or some rabbits or quail.

I was carrying my .243 caliber Ruger M77 Mk II. This is my favorite rifle. I have hunted with it for about 10 years or more. I'm not sure when I actually purchased it. It was shortly after my trip to Colorado to hunt mule deer in 1998 I think.

On the .243 I recently mounted a cheap little scope I bought for $30 at a gun show at the Linn County Fair on January 10, 2009. The scope is a 4x32 NikkoStirling. So far I am actually pretty impressed with it. It is clear and seems to hold zero pretty well.

Now, I know what you are thinking, if you have read my story 2007 Trophy you know I have had scope problems and now I am using another cheap scope! Such is the life of the poor hunter. I will try to save money for another high quality Nikon scope.

For the .243 I will get a Nikon Prostaff 2-7x32. I want a low profile, lightweight scope for that rifle. That's part of the reason I bought the cheap used scope at the gun show, it's very sleek and makes the completed setup (rifle/scope/sling) a pleasure to carry compared to my Remington Model 700 ADL in 30-06, which is beautiful but fairly heavy.

Before heading out to the hills, I went to the sporting goods store and picked up some 80 grain Federal cartridges for coyote. I sighted in the rifle at one inch high at about 100 yards. I love shooting that little rifle. I couldn't even feel the recoil with the 80 grainers.

Last week I bought a Primos Lil' Dog call and practiced up a bit with some howling and distress calls. I want to get out this Saturday morning really early if I can and try to call one in. That would be so much fun!

Anyways, SM2 and I were accompanied by his son. SM2 was carrying a little 410 shotgun We didn't see any game at all but it was a beautiful day. We did see lots of deer tracks and some coyote tracks.