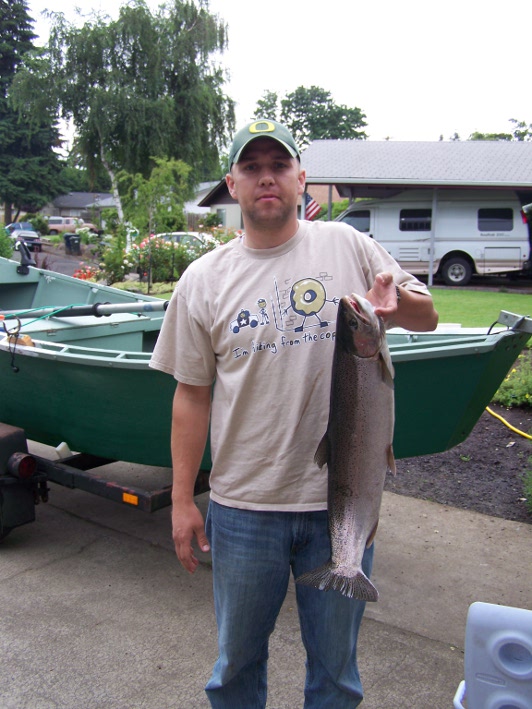 It was an early Saturday morning in July. My fishing buddy, Jamie, had recently purchased a used wooden drift boat and we were trying to learn how to maneuver and fish from the thing on the Willamette River in Springfield.

The "in-town" run of summer steelhead was in full swing and we had been on the water a few times that summer, only to watch people yard in steelhead all around us while we didn't even touch a fish.

But this would be our first early morning trip and we were hoping to beat the other fishermen to the good holes.

If I remember right, we were the first boat on the water that morning. We put in at about 4:30am at the Island Park boat ramp. It is a short float from there to the D street ramp, but there are some great holes in that stretch.

Jamie was on the oars so I had rod in hand as we started toward our intended fishing spot. We hit a few holes on the way there, but didn't spend much time on them, hoping to get to the real good water first.

We rounded the bend that turns the river towards the D street ramp. At the top of this stretch is a great tailout that drops into a fast flowing chute on the south side of the river.

We dropped anchor about 30 feet from the top of the tailout in perfect position to swing some flies across in front of the boulders that formed the tailout.

I was fishing a #6 purple egg sucking leach on an 8.8 pound tapered leader. My rod is a 6/7 weight Eagleclaw. Jamie had just anchored the boat and was getting his rod ready by the time I had made my first cast.

The fly started its swing and was headed towards the most prominent bolder in the tailout. I thought to my self, "If there is a steelhead in front of that boulder, my fly will be touching it's nose, right.........now!" The instant I said now, BAM. Line peeled off of the reel for a short distance and I yelled "fish on" to Jamie.

I think it took him a second to realize that I meant FISH ON. The fish quickly turned and swam straight towards the boat very fast. I reeled as fast as I could trying to take up the slack but it was coming too fast. I thought that I had lost him, but when the slack was gone he was still there.

Then peeling straight away from me, the fish made 3 great head over tail leaps, making a huge splash each time. It ran down the main rapid and stopped behind a boulder just to the left of the chute. It jumped there at least 3 times.

I really get excited when those big fish leave the water.

Finally the fish took off down river again and we decided we had better follow in a hurry.

We went through the chute and pulled into the eddy formed on the north of the run. The water here was about waist deep, maybe a little deeper. I played the fish to the boat after it had made a few good runs into my backing.

Jamie (at the time) had a trout net with a long handle. The fish came side up next to the boat and Jamie reached over in front of me to net the fish. This entirely blocked my view of what was happening. I realized there was something wrong. The fish was not fitting in that net.

I was keeping tension on the line up to this time to try to keep this fish up and on the hook, when my rod whipped up in to the air and I realized the fish was off.

"He's off, He's off," I yelled to Jamie. My hook had been caught up in the net and my line broke. Jamie leaned over in front of me even harder and I could tell he was still struggling to get this fish in the net.

I was able to lean over him and see that he now had the fish pinned to the bottom of the river. The net was at the midsection of the fish and I could see it's head and dorsal fin lying against the bottom.

"What do we do now," I thought. But before I could say anything, Jamie slipped over the edge of the boat, head first, and was under the water.

So, it's about 5:30am and I'm on the Willamette River and Jamie is under water in the river. My first thought was that he must have slipped and fell in and I should save him. Then I realized that he hadn't fallen, but jumped in after this fish.

I felt horrible that he had jumped in to get the fish because I knew that there was no way that he was coming up with that fish. Steelhead are known for their strength and tenacity.

Well a few seconds went by and finally Jamie came out of the water about 10 feet from the boat. His back was towards me and he was all hunched over. He slowly turned around with this look on his face like he was in shock or had seen a ghost or something.

He was hugging a steelhead with everything he had. He still had his net in one hand. I was yelling at him to get his fingers through the gills of the fish because I knew that if that fish were to make one last struggle he would probably be gone.

Jamie looked as if he didn't even hear me yelling for the first two times I said it. Then the third time he seemed to snap out of it and grabbed the fish through the gills.

He made a few slippery steps towards the boat and handed me the fish. It slipped from my hands and into the bottom of the boat.

I helped Jamie into the boat and he started coughing up water like crazy. I asked if he was alright and after a few seconds we were high-fiving and yelling loud enough to wake up the neighborhood that we were fishing in.

Jamie wasn't sure exactly what had happened. He said that he didn't even know that he was under the water and he was trying to breath (thus the coughing).

He had gone to the bottom of the river and pinned the fish to the bottom with his chest, then scooped his arms around it and came up.

I don't think the fish made a single movement until it hit the bottom of the boat. Jamie had scrapes up and down his legs that were bleeding pretty good.

This tops the chart as the craziest fishing story that I have been a part of.