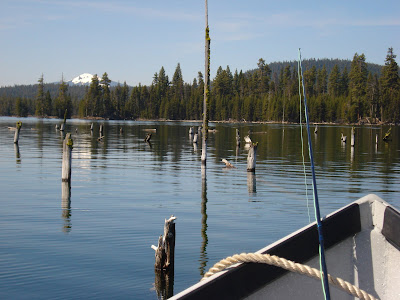 You might question my sanity (I did) when I tell you that I got up at 2:40 a.m. yesterday morning (Saturday, May 16, 2009), to drive three hours one way, to go fishing at Crane Prairie Reservoir, knowing I would have to turn around and drive back home at noon. Such is the life of a working man. Crane Prairie is located in Oregon, in the Deschutes National Forest on NFD 46 Rd. I had never been there before, but back in high school, I used to hear about Crane Prairie Reservoir and its huge rainbow trout and brook trout and for some reason Crane Prairie was a mystical place, far, far away and it was almost as if I wasn't worthy to fish there, even though I always wanted to. Maybe it had something to do with the fact that I don't have a boat and it's a huge lake... Rainbow trout have been caught up to 19 lbs at Crane, and that was the main attraction, big fish! You can't catch them if you don't go and try, right? So, try we did. It was a beautiful day and I can attest to the fact that there are big fish on "The Prairie!" 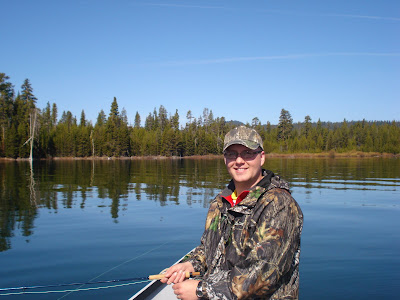 The day was sunny and warm. It was a beautiful day. We've (my brother and I) heard that the wind can really cause problems at Crane, but that didn't prove to be true for us yesterday! There was virtually no wind all day. We had no difficulty casting (at least due to the wind). The temperature was in the thirties in the early morning and warmed up to the high seventies by afternoon. We didn't catch a single fish at Crane Prairie. We talked to a couple of other fishermen and they had only caught one "stocker sized" fish. We did see several LARGE fish surface. They seemed to be pretty wary of the boat because no matter where we were they always seemed to be surfacing just out of fly casting range. I will have to admit - seeing the huge fish surfacing, obviously feasting on millions of damselflies, minnows and a myriad of other aquatic creatures, and not being able to catch a single fish, took a toll on my fisherman's ego. I think it was like when you take your favorite dish to a potluck, where there is so much food, and getting upset when nobody eats it. They could have at least taken a nibble. The bounty of the lake is what allows the fish to grow up to two inches per month. My bro and I read that Crane Prairie is not for the novice angler, because you could go all day without catching a fish. I guess the jury is still out as to whether I am a novice angler or not. I tried everything in my fly box! Just kidding, that would have been virtually impossible in the short five and a half hours we had to fish. I did try several different flies, including various versions of the famous Wooly Bugger and damselfly nymph. I even tried a bass fly when we went fishing around the old snags that cover 10% of the lake. There are supposed to be lots of big bass in the lake, but we sure didn't see any. My bro briefly tried PowerBait off the bottom and worms, and a worm with one salmon egg on the point of the hook under a bobber. He did say he felt some nibbling on the worm... The water temperature was between 54-57 degrees. The waters on "The Prairie" are surprisingly warm." Even though we didn't catch any fish we had a great time. The scenery at Crane Prairie is second to none, the weather was beautiful, we had good food and company, and the sound and smells carried very well across the lake. Thanks for taking me fishing, bro.
I went to work at 4:00 p.m. and got off early. I had to do something to help out my ego so I went fishing at Periwinkle Park, here in Albany, Oregon to fish at the pond there. Read about it here.
Tight Lines!