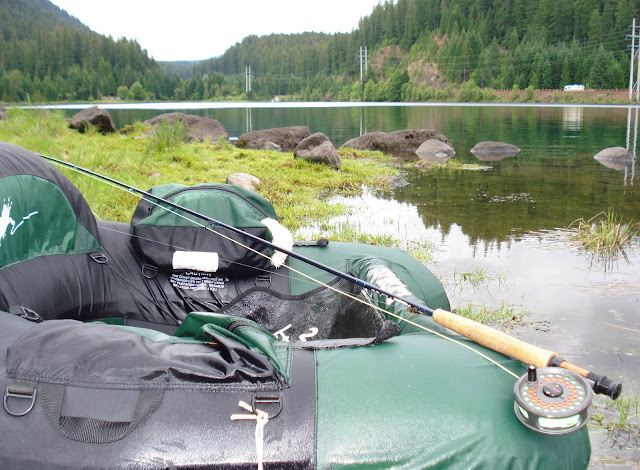 Saturday, June 20th was a wonderful fish filled day! I got up at 6:15 and loaded up my gear in my Nissan Sentra and hit the road. I headed up Oregon's Highway 20 through Lebanon and Sweet Home and over he Santiam Pass to the Highway 126 Junction. From there I headed southwest about 10 miles past Clear Lake and on to one of my favorite summer fishing spots, Trail Bridge Reservoir. Trail Bridge is frequently stocked with rainbow trout during the summer and ODFW has restricted fishing to artificial flies and lures. I'm afraid many fishers are not aware of those restrictions however as I heard bank anglers speaking of bobbers and saw PowerBait floating in the water along the bank. I arrived at the Reservoir at about 9:00 AM and hastily inflated my Caddis Float Tube (by dizzying lung power), then donned my new(ish) lightweight breathable waders and wading boots. I packed my float tube, flippers and fly rod down to the lake by the dam and was in the water in a few minutes! I already had a size 10 bead head Carey Bugger in “brownish-red” tied on the end of my leader, so I cast it a couple of times as I kicked over my favorite weed beds, not expecting much action. After a few casts, I made the wise decision and snipped off the Carey Bugger and tied on the fly fish go crazy over at Trail Bridge, an Olive Woolly Bugger. 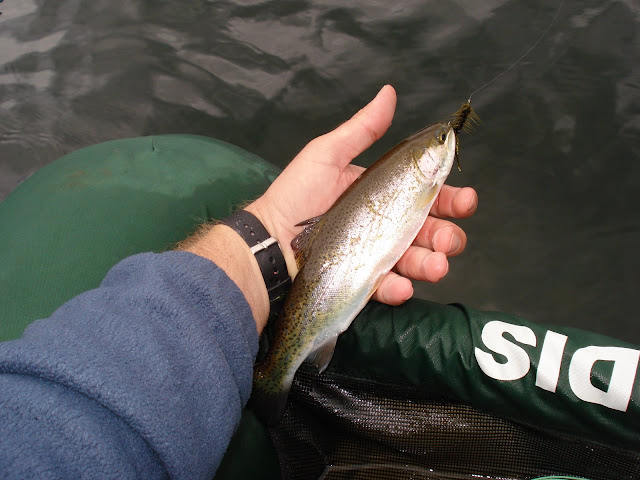 On the first cast, I shot out all the line and just let it sit there while I put my gear away in the float tube pockets and all the sudden... fish on! I didn’t even have to set the hook. It was a beautiful rainbow trout about 10 1/2 to 11 inches long. Some of the stocked fish take on a beautiful "purplish-blue" color that helps them blend into the color of the dark blue water. I fished on, from 9:00 AM until about 1:15 PM when, after 27 hard fighting fish, my Woolly Bugger broke off in some poor fish's mouth. I think I got my money's worth out of that fly! So, I tied on another and continued fishing. At this point I had convinced myself that I just had to catch 30 fish (releasing all but the largest fish unharmed, so as not to exceed my daily limit) before I left... Well, a major psychological barrier set in or maybe it was the barometric pressure, or the fish were taking a siesta, or something and it took me another 45 minutes to round out my 30 fish day. In fact, I had all but given up and then caught the 30th fish as I kicked my way back to the bank! So far, the day had been quite fishy, but I wasn't finished yet! I took off my boots and waders, deflated my tube and packed all my gear into the trunk of my car and was off down Highway 126 towards Springfield to my brother's house to help him move some stuff into storage and then hit the Willamette River in his drift boat for steelhead/salmon! As soon as I saw the little bars on my cell phone, I called my brother, who probably was wondering why the heck I hadn't answered his phone call about an hour and a half earlier. I explained the predicament I had been in, and got a laugh out of the 30 fish statistic. We chatted until I hit the town of Leaburg, where I made a pit stop for some health food (2 chicken strips w/ Ranch, a jalapeño corndog and a 32 ounce of Mountain Dew) and some sand shrimp for “big fish” bait, provided to the store by Steelheaders West according the lady behind the counter. Made it to Springfield, fulfilled moving duties, hooked up the boat, loaded our gear and headed of to a nearby boat ramp. With the boat in the water, the excitement began! I desperately tied my one-and-only, purple Egg-Sucking-Leech onto the end of my Scientific Anglers 9ft, 6lb, tapered leader. Casting just slightly upstream, letting the fly “dead-drift” for a few seconds, I let it swing across the deeper runs. I fished this way for a couple of hours. My bro was using a red diver with sand shrimp... Sure enough, all of the sudden, I was minding my own business, waiting for the tug at the end of my line when my brother called out my name excitedly, and I looked over to see the spinning rod that was sitting in the rod holder flapping like a willow in a stiff breeze! FISH ON! I took to the oars in short succession and, seeing how we haven't invested in a steelhead/salmon net, I had to maneuver the drift boat over to a shallow area to "beach" the beautiful bright hen steelhead. The fish made a couple of runs and after one failed attempt on my part to grab the fish, my bro took over, and successfully scooped her up, with one hand under her belly and the other securing her powerful tail. She was up out of the water and into the boat! 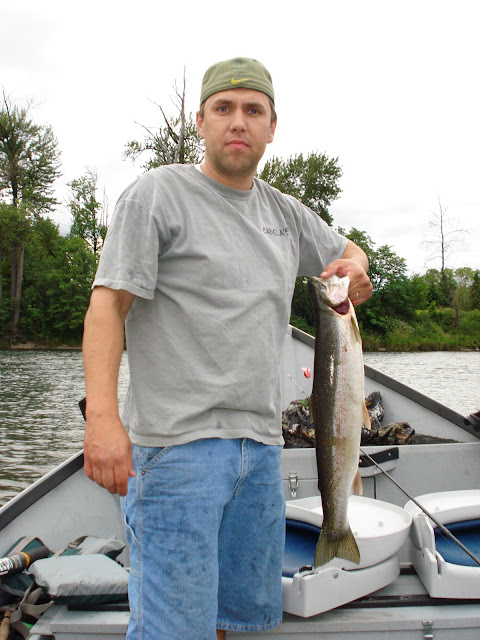 Now, that was exciting!

The only thing I caught a little later that evening was a nice cutthroat (about 15 inches) on the same diver and sand shrimp, which managed to release itself right next to the boat. I should have been really excited about it, and hey, I'm not complaining...
but I really wanted it to be a steelhead!