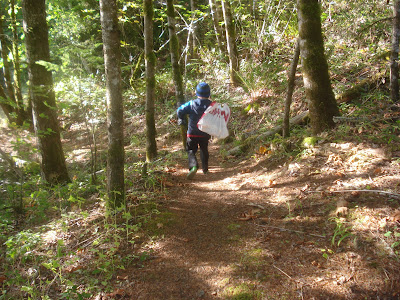 Went fishing today with my son to Foster Reservoir. Had high hopes but low expectations. Saw on the fishing report that Foster had been stocked recently, and since I am off all this week, I decided to give it a shot. We went to our normal spot on the North side of the reservoir and I was happy to see that the water was about five feet lower than it had been the last time we were there and got skunked. It took a while to get the two rods set up. Before we left I noticed that we only had three size 18 treble hooks. I knew we had to be careful with them. Once I had them tied on the two spinning rods we were ready to go. I cast my son's pole out in our normal direction and set it down, instructing my son not to touch it. Then, by the time I had baited up and casted out, I decided to re-cast my son's pole in another location. After a little while, we were just messing around and my son asked me to get something for him to sit on. So, as I was coming back with a big log, I saw his pole bouncing around. "Bruce, you've got a fish," I said. And he reeled it in. I was surprised at how big it was at 13-14 inches long, the biggest fish I ever remember catching or seeing caught at Foster. 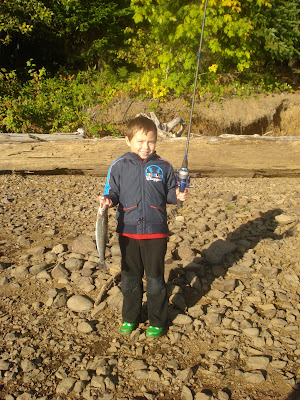 I moved my pole over by my son's and we fished together for a while but didn't get any action. So I set up my fly rod with an olive woolly bugger and cast around for a while. I went to the other side of the little point we were fishing at and saw another point about 75 yards away that looked good because there were some big rocks on the bank and it looked steeper there. I asked my son if he wanted to go over there and fish and he said yes. So I headed back over to where he was and figured I had better check his bait, somewhat surprised that he hadn't had another bite. Maybe that big trout was just a lone cruiser... The PowerBait was covered with weeds and then I knew why he hadn't gotten another bite. So I put some fresh bait on it and cast it out for him again, thinking we might just stay there for a little longer to see if we got any hits. By this time I was ready to give up with the fly rod. I had never had a whole lot of luck at Foster with flies anyways. So, I cast out my spinning rod again with orange PowerBait and a size 18 treble hook. I had to relieve myself, so I started walking over to the trees without watching where I was going and CRUNCH, I stepped on my fly rod and snapped it right in two. I was ticked off, I have had the worst luck with my rods lately! After returning from the tree line, all of the sudden both of our rods started bouncing like crazy. Two fish on at one time!!! I yelled at my son and we both reeled in some nice rainbows. His fish was even bigger than his first, and the biggest for the night at 14-15 inches! 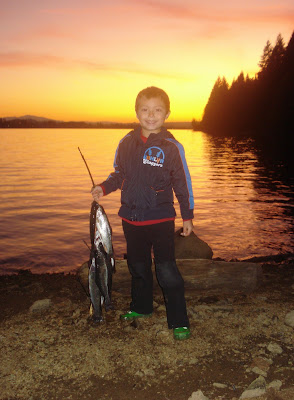 And so the evening went, catching fish mostly in pairs until just before dark we limited out. It was such a beautiful evening. It was funny, the last fish I caught was while my son was reeling in his fifth fish. I was reeling in my line to get out of his way, when about five feet from the bank I saw a swirl in the water next to my bait as it came out of the water. I looked over at my son to see if it was his fish and it wasn't. That's crazy, I thought. The water was only about 5 inches deep where I had seen the swirl. So, I tossed the bait out right where I had seen it and waited for about three seconds. I saw my line start to move slowly... then ZOOM, the fish took off and I gently set the hook! So, my son and I brought our fifth fish to the bank together. We limited out in October at Foster Reservoir! We gathered up all our gear as the warm evening sun set over the lake in an orange glow and then took a couple of pictures. We headed up to the car, watching for zombies on the way. Then, we made a pit stop at Mickey D's to top off the evening.