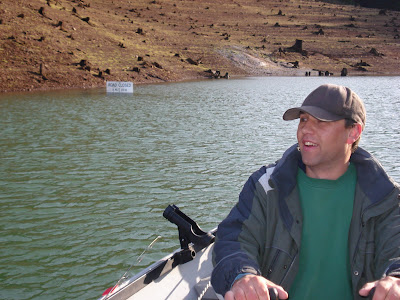 My bro (aka - Watchout.Trout) and I made another trip up to Lookout Point Reservoir to chase around some rainbow trout and "chinokanees." We got up there around 8:15 AM and launched the boat with some preoccupation about the water conditions. Lookout Point Reservoir is known to get pretty choppy, even on the nicest days. The wind was very cold and I was glad I had some Hot Hands-2 hand warmers. They did a great job keeping my hands warm and lasted all day.

It didn’t look too bad out there, but we later confirmed that looks indeed can be deceiving. We started out across the lake with the intention of fishing the far bank, where we had caught most of our fish the last time we were there, but not far out into the lake, we decided to turn around and fish the nearer shore. I’m glad we did.

We fished into one of the calmer coves and didn’t mark any fish on the fish finder, but something did catch my eye that we thought was pretty funny! 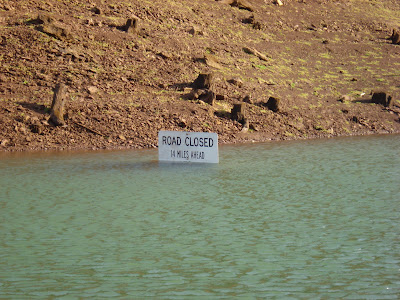 I guess this was and old highway sign before they made the reservoir. I wonder why the road was closed 14 miles ahead?

We didn’t get any action and as we moved down the shoreline the waves began rocking our world again. I was beginning to get motion sickness and started to think it wasn’t worth risking our lives for nothing. We were constantly looking behind us to see if the waves were going to crash over the side of the boat and sink us. In fact, I think I actually said, something like, “We are not even fishing here, we are just boating,” which wasn’t really true because he both had our eyes fixed on our rods in anticipation of a ferocious strike. Later, I even said that it would take an eighteen inch “chinokanee” to make this trip worth our while.

Now, I have a tendency to make things sound much worse than they really were when I am writing here. It really wasn’t all that bad. You know what they say, “A bad day of fishing beats a good day at work."

‘Round about the time I had resigned myself to another fishless day under “not-so-ideal” conditions, and in the midst of an interesting discussion of current political events, SLAM, I had a fish on the little Dick Nite spoon that I am growing so fond of. A GOOD FISH! It was jumping and thrashing on top of the water before I could even get my rod out of the rod holder. -With rod in hand, I reeled in a beautiful 13 inch rainbow or “cut-bow” (I am not sure, but it may have been a crossbreed between a rainbow and a cutthroat trout - you make the call)! 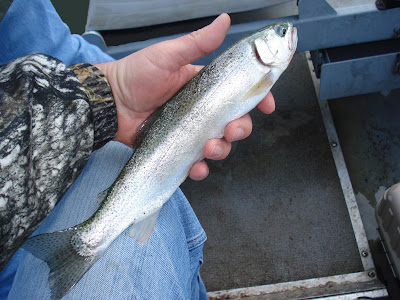 Now, I was very excited again and was very happy to be there, even though it wasn't an eighteen inch "chinokanee." 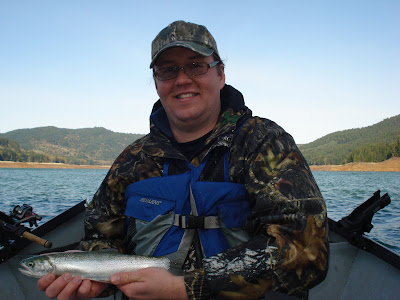 Not long after catching my fish, my bro had a fish on, it was a monster “chinokanee” (actually a landlocked Chinook salmon about 6 inches long). 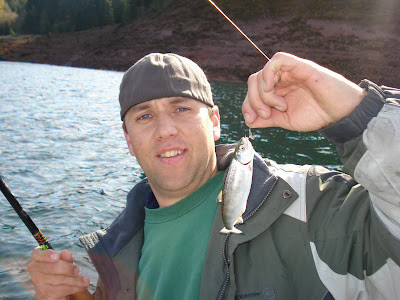 And those were the only two fish for the morning.

Getting back to the boat ramp took a significant amount of time as we were rowing around a big point in the lake and the wind was just a whippin’ through there. It took us probably 15 minutes to go thirty yards at the worse point. 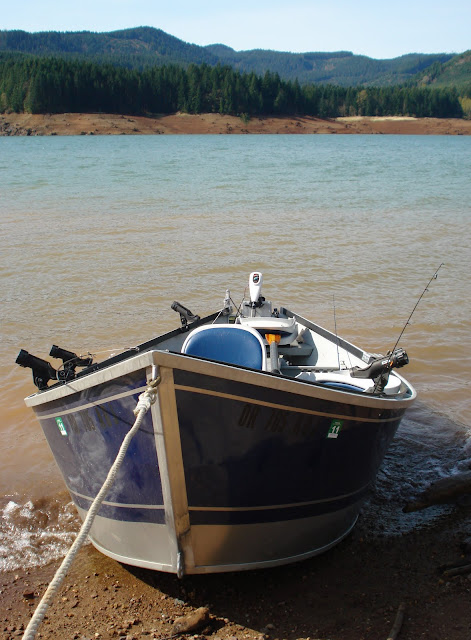 We were glad to be back on dry land and to call it a day. This really is a beautiful lake!

I headed towards home and as I approached Harrisburg, I decided I might stop by Bond Butte Pond (some of my old stomping grounds, read about one interesting evening I had at this place several years ago here) and see if I could catch a few small bluegill there, just for fun. 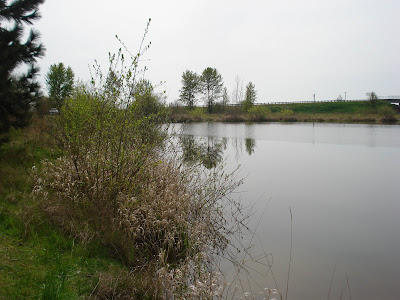 Bond Butte Pond. Some of my old stomping grounds.
I walked along the east bank casting my fly rod and caught 20-30 small bluegill on a size 12 bead-head Hare’s Ear, a size 12 Prince Nymph I had tied myself, and a black bead-head Chrystal Bugger, which accounted for the biggest fish of the day (a realy monster, shown below). 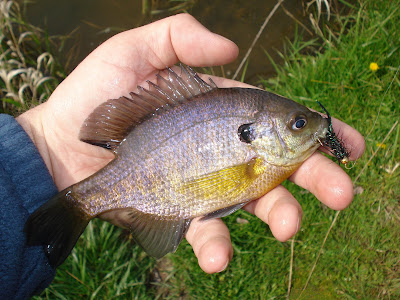 I love the colors on these bluegills, especially when they get a little bigger, the purple seems to really come out in them. They are great fighters too!

I also had a pleasant conversation with a local gentleman that was bass fishing. He said the biggest bass he had caught at that pond was a 6 pounder. I believe him.

It was an extremely enjoyable day. On my way home I drove though my old hometown of Halsey, which brought back all kinds of nostalgia. I can’t explain why, but as I drove home under the beautiful sunny sky, I felt a deep sense of contentment and a bright hope for the future. The day was actually quite theraputic. And that’s another reason I love fishing!