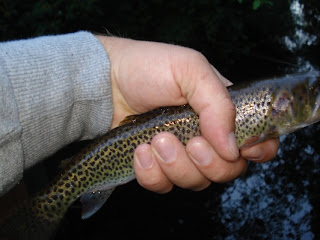 We were getting ready to take a little hike and see some waterfalls not long ago.  I had been tipped off that there were some cutthroat trout in the little creek that runs through the area.

I decided to go ahead and just pack my fly rod and one box of flies and give it a try.  I was hoping my wife didn't mind.  My interpretation of the fishing regulations was that the area was open to fishing.

After having a little picnic, we headed down the trail.  When we got down near the stream, I searched for a spot that might be deep enough to hold a fish.  The creek averaged between 7-10 feet wide I would say.

It took me a little while, but eventually I found a nice little hole where the water dropped off just behind a ledge.  With my wife's consent, we stopped for a moment so that I could toss my bead-head Hare's Ear into the water.

On the first cast (not very well placed) I didn't have any hits.  I tossed the fly a little closer to the ledge and this time there was a little wiggle in the line.  I raised the rod tip and could feel a decent sized fish dancing on my rod tip.

I brought in a beautiful cutthroat trout.  It's back was darker than I ever remember seeing on a trout.  The little stream is in a dark little canyon, covered by tall trees, so I think this was a fishes adaptation to the water, which looked almost black.  The darkness of the fish enhanced it's beauty seven fold in my eyes.

Not one to give up on a hole after catching and releasing a beautiful trout, I tossed my line back into the same hole, this time a little further to the right.  Sure enough, a little twitch and I lifted the rod.  This time the fish was even bigger- about 11 inches long.  It was another dark, beautiful and healthy cutthroat trout.  I promptly released it.

I was very excited about discovering a new spot where there was excellent fishing for native cutthroat trout not far from home.  I planned to come back by myself when I had more time and hike all the way down the trail and fish all the likely holes.  The thought was inspirational to say the least.  How could this be?  Such excellent fishing and you never heard anybody talking about it.

My wife's patience was waning and I decided I better not push my luck.  So we headed down the trail, very content myself.  We enjoyed the rest of our hike down the trail in the beautiful evening light.  The temperature was perfect under the canopy of trees.  I didn't really see any good fishing holes after that, which were easily accessible, until we went back up to the park area.

My wife and my son were taking pictures and playing in the park and I moseyed over to a bridge that crossed the creek.  I stood in the middle of the bridge and tossed my fly into the water.  I watched the fly drop down near the bottom and drift along with the current.

Suddenly a fish came up out of nowhere and snatched my fly.  It was another beautiful cutthroat, similar in size and beauty to those described above.  I took a couple of pictures and released him too.  I repeated this process a couple of more times until my wife called for me.

Together we walked further upstream to a little dam.  I tossed my fly in the water below the dam and caught one or two more fish.  Then, I let my son bring one in on the fly rod that I had hooked in the slow calm pool above the dam.

Just after we released the little "cutty", I looked over my shoulder and saw a man in a uniform walking directly towards me.  In the distance I could see a white pickup behind him.  I didn't have a good feeling about this.

I continued to cast my fly into the pool, thinking that I wasn't doing anything wrong, yet not liking the prospects of this impending encounter at all.

When the slender man arrived he politely said, "I hate to burst your bubble, but we don't allow fishing here."  I immediately reeled in my line and began to talk to him about the matter.  I asked if there was any fishing allowed below the dam and he said there was not.

He explained that you couldn't fish anywhere in the park because you weren't allowed to get off of the paved trail.  If you found a spot where you could cast from the pavement, he supposed you might be able to get away with it, but that was unlikely to happen.  And, though the area around the pool we were fishing was paved, fishing wasn't allowed because it was a swimming area.

I was feeling quite stupid at this point and I definitely wasn't going to argue with the nice park ranger.  So, I started walking with him toward the parking lot, determined to get out of there as quickly as possible.  My wife thought that was quite ironic, considering how, despite her best efforts, I was unwilling to leave only moments before.

All in a moment, the excitement of finding a new fishing spot became bitter and confusing.  I guess I wouldn't be coming back to fish here again.  That was very disappointing.

I was glad I hadn't decided to take any fish home with me.  That would have made the whole episode even more embarrassing.

Even though, I had done the wrong thing by not following park rules (albeit unknowingly) I will always remember the wonder and excitement I felt when I fished this particular creek.

I guess that is all I will ever get.  The fishing was excellent in those forbidden waters.  It was like I would have imagined it to be when the settlers came to Oregon.  The fish were uneducated and hungry and there were plenty of them. 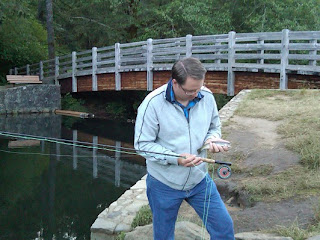