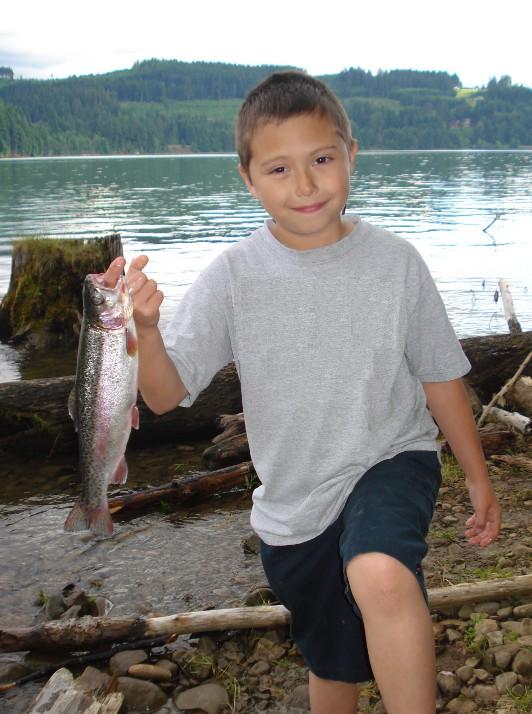 As we traditionally do each spring, we have been up to Foster Reservoir a few times this year. We have had a bit of luck fishing for trout stocked by the Oregon Department of Fish and Wildlife (ODFW).

My son caught this nice rainbow trout yesterday, which I thought was definitely photo worthy! He thought he was hung up on the bottom of the lake, then he said, "No, it's a big fish!" I was proud of him, he handled it all by himself, as I was a short distance away fishing for smallmouth bass.

The first trip this year, I went to Foster by myself on a Friday evening because he was too tired from a field trip he went on with his classmates.

So, I drove over to Sweet Home, Oregon and went to my favorite spot, only to find that there was too much debris in the water. I decided to fish around the debris in that spot and after about half an hour, I didn't get a single bite. So, I was getting a little discouraged.

I decided to try the other side of the point, where there is a bit more undergrowth (some of which was poison oak or poison ivy I found out later) on the bank but much less debris on the shoreline. The lake bottom slopes down gradually at about 35 - 40 degrees and there aren't as many stumps or big rocks on the bottom to get snagged on in this location.

The weather was a bit frightful, as the clouds menaced with the threat of rain, and thunder occasionally threatened the prospects of a premature ending to my fishing trip. 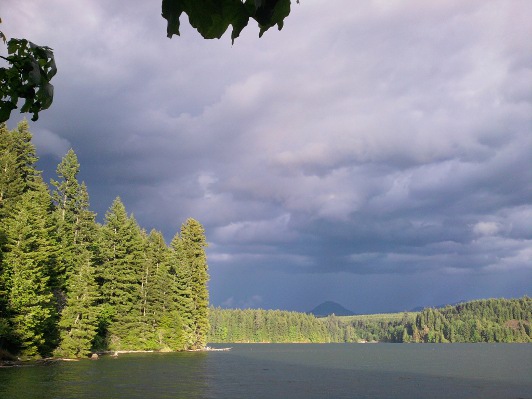 In fact, when I decided to try out my newly acquired metal "stringer" (the type with the metal clips), I suddenly thought better of it as I had visions of being struck by lightning while holding the conductive "chain-o-death".

It turned out that the storm never really did come down out of the mountains, and the fishing proved to be fantastic in my newly acquired location. I caught my limit before it got dark, which was about 45 minutes after I started fishing there. The fish were small, but I was very happy with my success.

I took the fish home and after cleaning them, I salted them, rolled them in flour and fried them in some oil outside on the propane burner. They were absolutely delicious! All of the fish-eating members of the family enjoyed them.

On the next trip, my son went with me and he caught five trout, while I only caught two! It was weird, as soon as he had his limit, the fish just stopped biting. Since dad had been busy helping the boy after landing his fish and gobbing fresh PowerBait onto his treble hook, he had been too busy to catch his limit before dark on this trip- or that's my excuse at least.

Yesterday at Foster I didn't even try for any rainbows. All I did was cast lures for smallmouth bass. My son only caught the one trout pictured above, and then he started casting for bass too. We ended up landing seven smallmouth bass ranging from 6 - 8 inches in length, and two northern pikeminnow using various lures.

So, it has been quite nice to enjoy the outdoors with my son at Foster this spring. Now if only we can heal from the afflictions of nature, i.e., bug bites and poison oak, we will head out again soon!