Steelhead Fishing on the Willamette River 2013 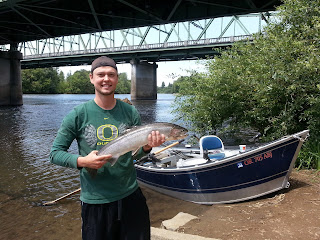 The morning didn't get off to a good start. We kept having issues with the gear. Our bad luck hit rock bottom when our steelhead net mysteriously disappeared from the boat. No kidding. It was the weirdest thing. I looked over and noticed it was propped up on the side of the boat, but it looked secure enough.

I figured it might get in my brother's way as he rowed the boat, so I would put it down in the bottom of the boat after making one more cast with my fly rod. After retrieving the line, I looked back and the net was gone. I was thinking my brother had moved it, but that was not the case. It was just gone. I felt pretty bad, even though it really wasn't my fault.

About the only thing that was going well for us was the weather. It was beautiful out that morning, which is good for humans, but not necessarily good for fishing. One should never complain about being out on the river on a beautiful morning. We even stopped to pick some berries on the side of the river at one point.

And part of our mission, unbeknownst to me, was to retrieve a lost anchor that had been haunting my brother in his dreams. 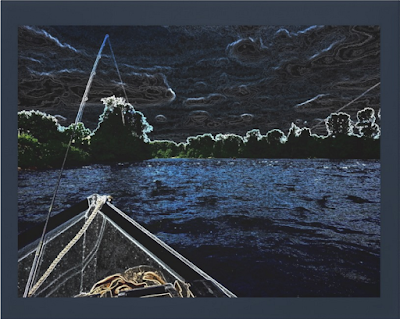 Retrieving the anchor was a life or death situation.

There I was, sitting in the boat wearing a Cabela's life jacket (very stylish). I was rowing my flabby arms off.

My older brother was hanging off the back of the drift boat in swift water up to his chest, trying to free the rogue anchor from the bottom of the river. He was not wearing a life jacket.

Okay, I am probably making this sound more dangerous than it actually was. But the irony of the situation hit me pretty quickly. I was concerned for my brother's welfare as he willingly put his life at risk to retrieve the anchor.

He said that if he didn't get it, he wouldn't be able to sleep for a year, as the waters would soon rise with the autumn rains. There it would wait, beckoning at him to come and free it from the rocky bottom.

It all turned out okay in the end. In fact it was the second anchor we had recovered from the river this summer. The first one was a cake walk compared to this one.

Things gradually began to improve as the day went. I was casting my fly rod with a purple Egg Sucking Leach pattern and letting it dead drift down to the bottom. My line stopped all of a sudden and I set the hook.

I was a bit surprised to see a flash under the water and feel a heavy fish on the end of the line. I thought it was a steelhead. After a few seconds I realized that I had a good sized Northern Pikeminnow. Here is the result. 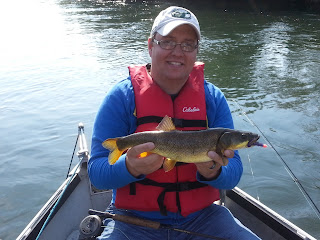 As we were finishing our drift we arrived at a very popular hole where we have caught a lot of steelhead.

Sure enough, my brother's rod went down. Fish on!!! We rowed the boat to the sandy bank and my brothers beached the fish- a bright 29 3/4 inch steelhead! It was the second steelhead caught from the boat this year.

While they were busy landing the fish, I taped the whole thing for your viewing pleasure.