John Gierach is one of my favorite authors of all time! I wrote a review on him here. A new book of his will be released soon by Simon & Schuster. Here's the lowdown: 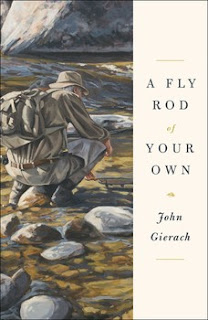 John Gierach, “the voice of the common angler” (The Wall Street Journal) and member of the Fly Fishing Hall of Fame, brings his sharp sense of humor and keen eye for observation to the fishing life and, for that matter, life in general.

John Gierach is known for his witty, trenchant observations about fly-fishing. In A Fly Rod of Your Own (Simon & Schuster; April 4, 2017; $25.00), Gierach once again takes us into his world and scrutinizes the art of fly-fishing. He travels to remote fishing locations where the airport is not much bigger than a garage and a flight might be held up because a passenger is running late. He sings the praises of the skilled pilots who fly to remote fishing lodges in tricky locations and bad weather. He explains why even the most veteran fisherman seems to muff his cast whenever he’s being filmed or photographed. He describes the all-but-impassable roads that fishermen always seem to encounter at the best fishing spots and why fishermen discuss four-wheel drive vehicles almost as passionately and frequently as they discuss fly rods and flies. And while he’s on that subject, he explains why even the most conscientious fisherman always seems to accumulate more rods and flies than he could ever need.

As Gierach says, “fly-fishing is a continuous process that you learn to love for its own sake. Those who fish already get it, and those who don’t couldn’t care less, so don’t waste your breath on someone who doesn’t fish.” From Alaska to the Rockies and across the continent to Maine and the Canadian Maritimes, A Fly Rod of Your Own is an ode to those who fish—and they will get it.