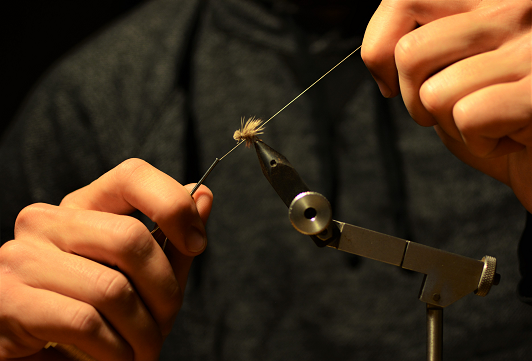 It was around my tenth birthday, and my grandmother had bought me a beginner fly tying kit so that I could follow in my grandfather’s footsteps as the family fly tier.

At the time, I understood what it meant for me as a fisherman but didn’t quite understand how it connected me to my grandfather. He had died before I was born and as such I never met him, I only knew him from stories and tales my family told me. From what I heard, his fly tying room was covered in hooks and feathers to the point where it was dangerous to walk into the room without wearing a pair of shoes.

That day, I held the fly tying kit imagining my grandfather sitting at his desk and was excited to take on this new hobby in pursuit of my fishing endeavors.

I’ll be honest, at first I was an absolute mess. Every fly was a random assortment of hooks and feathers and rubber and I distinctly remember thinking to myself that every fly was a new, unknown creation so I had the opportunity to name them all.

That was before I learned about fly “patterns” and so I went forth into the fly fishing world with a box of my very own Frankenstein flies and a sense of reckless abandon.

A few of the flies I tied were generally “fishy” looking and I like to think now that, if I still had them, fishing them in the correct way MIGHT elicit a bite but that’s probably a stretch. Or so you’d think.

One day my family and I took a camping trip way up in the Rocky Mountains near a lake that was abundant in rainbow trout that would readily take a fly from the surface or otherwise.

After spending a few days there, we had caught copious amounts of trout and at the end of one evening I took to walking the bank of the lake. As I wandered off, the lake began to come alive with the fervent splashing of trout attacking the spawning mayflies.

The evening sun sent streaks of fire across the surface of the water and sparks of light flew off the ripples of surfacing fish. The echoing smacks and slurps reminded me of all the fly fishing books I'd ever read. This is it. If there was ever a time to get out my flies, my conscience told me, the moment was now.

I raced to my bag at camp and unearthed my box, tucking it under my hand as I flew across the shoreline, the sounds of lively fish swirling around me, prompting me to run faster. I had no fly rod, so I merely took the old rig off my trout rod and threw on the fly.

Now, I guess you could say that this fly was my approximation of a hare’s ear nymph. The hook was too big and the fly itself was just a glob of hare fur haphazardly thrown on with sewing thread that did not even match the look of the body. In all areas, it should have scared fish away, not enticed them.

I cast the fly as if I had a fly rod, whipping the line back and forth and pulling it in just like I had seen in the videos. After a few tries I got some sort of hand on it and focused on watching the little bug in the water.

The reason I watched it so intently was because the fish actually followed it. Whether out of pity or hunger, the rainbow trout would race behind it and nip at the fly just enough to tap the rod in my hands.

In a way, the fish were teasing me, baiting me into one more cast, one more throw.

Whatever the reason, I was absolutely transfixed. A fly that had been made by my own hands was baiting fish into nipping at it as if it were a food item.

From that day forward I remember what it was like to realize the power I had discovered at my fingertips- that through learning the art of fly tying, I could catch fish with the tools sourced and created by me. It was like magic, and I was hooked.

To this day, I am still empowered by that knowledge and no longer rely on store bought flies to catch fish. I own a fly rod of my own and tie flies enough to make them for my friends and family.

When I fish, I remember my grandfather. Though I never met him, my flies are a legacy passed down to me through family ties.

I fish for fulfillment. I fish to connect with my past, enjoy my present, and inspire my future.