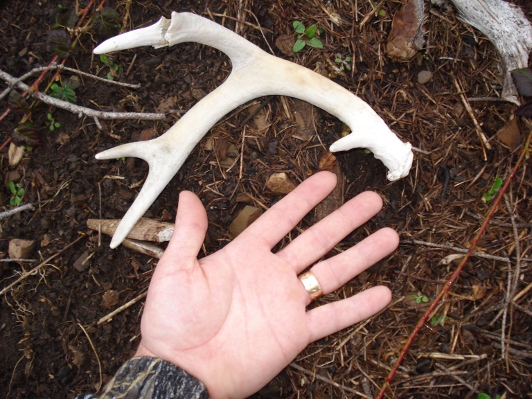 On Monday, February 16, 2009, my wife and I celebrated seven years of marriage.

The night before our anniversary I told my wife I was going coyote hunting in the morning. I assured her I would be back before she even got out of bed.

We both had the day off, so I suspected she wouldn't be out of bed before 10:30 AM. I was surprised when she didn't object to my idea of heading out to the hills by Brownsville, Oregon to chase some coyotes.

She only reminded me I must be crazy and that I ought to be working on that "honey-do" list she has been adding to lately.

At about 6:00 AM the next morning, the alarm clock went off and I laid in bed for a while debating on whether or not it was a good idea to get up and go.

I got all my gear together, including my .243 Ruger, my Primos Lil Dog Coyote Call

, my Federal 80 grain cartridges, my backpack with my binoculars and some other things. I quietly snuck out the door before my wife awoke and changed her mind.

I made the half hour trip to Brownsville and drove just outside of town. Up an old familiar road I went, towards the locked gate, on some property owned by Cascade Timber.

Just before I arrived at the gate I looked over to the right to see three deer running along the other side of the fence, right next to the road. None of them had horns but who knows if they were bucks or not, because if they were, they probably had just recently shed their horns.

“A good sign," I thought. “The animals are out and about.” It was just after sunrise. I arrived at the gate, parked my Nissan Sentra and decided against carrying my backpack. I wanted to travel light this morning and concentrate on making it an enjoyable excursion.

I loaded only the essentials into the over-sized pockets of my camo jacket and loaded my rifle.

Something about the glow of the brass and copper of the cartridges, and the click-clank, click-clank, as I load them into my rifle brings a smile to my face.

Walking up the road and past the gate, as always, I had my eyes peeled for deer. I am always interested in seeing deer when I am in the woods, even if I don't have a deer tag on me. Not because I would ever shoot one without a tag, but just because I love to see them so much and hope to learn something of their habits and habitat that can be used during the fall general rifle season.

Last November when my brother and I were hunting this same area for elk during the muzzleloader season, I had a very enjoyable morning walking along the top of this same hill.

That beautiful November morning, the rising sun peeked over the top of the hill and shined with a golden glow on the green douglas firs that lined the edge of the clear-cut. In the shadow of the hill, the cold, crisp air gave the dry grass a lavender coolness.

A few minutes later, I paused as a blacktail doe trotted slowly through a small meadow, about 80 yards in front of me. She paused in the middle of the meadow, now lit with the golden rays of the sun. She stood and looked at me for a moment, then disappeared over the side of a small ridge.

The scene was beautiful. Shortly thereafter I met up with my brother. We walked together through a recent clear-cut, enjoying the warm sunlight on our faces with cheerful hopes of finding an elk or two.

The road I was hiking today makes switchbacks across the side of snake hill. On one of the switchbacks, I started following a skid road up towards the top of the hill, along the edge of a clear-cut.

As I slowly made my way, I looked up near the top of an adjacent hill and saw what I thought looked like a deer in a small clearing. I pulled up my rifle and looked through my scope. Sure enough, it was a deer!

Since I had left my binoculars back in the car, I hiked up into the side of the clear-cut I was skirting and found a stump to rest the rifle on, so that I could get a better look at the deer through the cheap 4X scope.

By this time the deer had moved. I scoped around for a couple of seconds and found the deer again. To my surprise, I also spotted three other deer that were looking down towards me.

It was fun to watch them for a few minutes while they made their way along the side of the hill and out of sight.

I figured this was as good a place as any to try to call in a coyote with my Primos Lil-Dog Predator Call.

I can't say much for my calling skills, and nothing came in. I wasn't too surprised, since I figured that if the deer were spooked, a predator like a coyote was sure not to come out into the open to a call.

There was coyote scat all over the side of the hill, so I know they had been around. It was fun to try anyways.

I decided to continue hiking up the side of the hill. I wanted to see if I could find any sheds up where I had seen the deer and maybe use the call again.

Obviously this shed was not from this year. I couldn't believe it had survived at least one year just sitting there, right in the middle of the road. What a great bonus to a coyote hunting trip in my favorite hunting area!

I didn't have my heart dead set on shooting a coyote, I just wanted to enjoy a bonus morning in the field, and that was exactly what I was doing.

I made my way up near the top of the hill where I had seen the deer. I looked around all over the place, but didn't find any more antler sheds. I used the call a couple of more times, including an imitation of a fawn in distress.

When I got to the other side of the hill I looked down into the bottom of the clear-cut to see if I could see any deer or anything else interesting, but there was nothing.

I looked over to the tree line on a bench near the top of the clear cut, "That looks like another deer standing there at the edge of the tree line," I thought.

I raised my rifle, and sure enough, it was another deer looking straight at me. Then I saw movement behind her and there was a second deer turning around and heading back into the timbers. Wow, that was nine deer spotted for the morning! Not bad!

a few more times before making a mad dash down the hill to head back home. 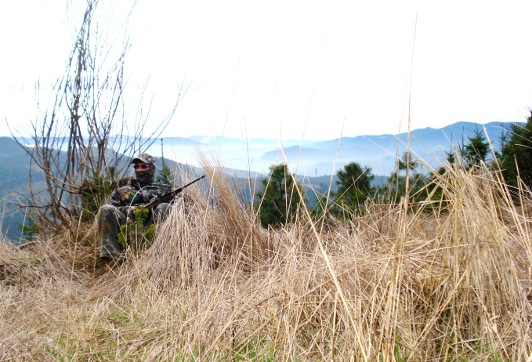 After calling for a few minutes and taking a couple of pictures of myself with my digital camera, I headed down-hill to go see my wife on our anniversary. What a nice anniversary present she gave me this year!

A bonus morning in the field!

By the way, I made it home in time. My wife didn't throw anything at me when I walked in the door.