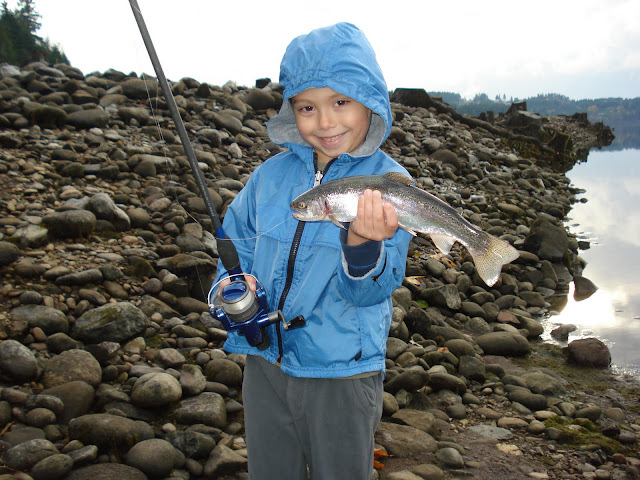 My son and I went fishing at Foster Reservoir today. We arrived and noticed that the water lever was back down at the same level it was at in May of this year, so I decided not to go to our secret location on the North side of the lake but to go to the South shore where we fished during May and had a lot of luck. I was kicking myself for not bringing my fly rod. This is the place I like to roll cast some Balls O' Fire Pautzke Salem Eggs and let it slowly sink down and then watch the line go shooting out when a fish takes it. Oh well...

Again, I don't usually fish Foster this time of year, so I was hoping for some fish but not fully expecting to catch any. We got down to the lake and the water was perfectly calm and reflected the sky like a mirror. The sun came out for a while and we enjoyed the warmth. 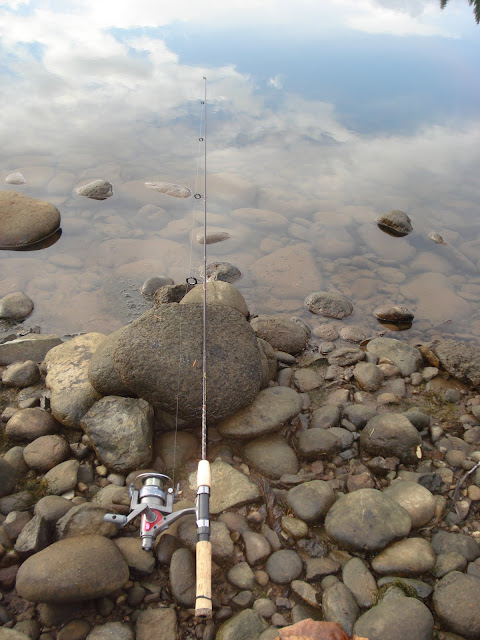 About twenty minutes after casting out our lines, my son had a fish on. He reeled it in and it was a big rainbow trout (about 15 inches).

He was using green PowerBait

like we usually do. I was using orange PowerBait. I got a bite right as I was trying to pull the hook out of the fish's mouth. I went over to my pole thinking that I would easily bring in the fish. I think I picked it up a pre-maturely, because after picking up my rod I felt nothing. Oh well, I was sure now that we would have more chances today. The weather was great and we had a couple ours left of daylight still.

And more chances we had, but for some reason we couldn't bring the fish in for one reason or another. My line broke once, my son wasn't paying attention most of the time and I had to tell him when his rod was about to take off into the lake. He would pick it up and there would be nothing there. So, as the sky darkened from an imminent storm, his rod fell over and I yelled at him to grab it, but he didn't grab it fast enough, so I grabbed it and reeled it in. And that was the only other fish we caught today (rainbow trout, about 13 inches long).

Note: At first we were casting out about as far as we could, but one time I was reeling in and I saw a fish chasing the bait less than ten feet from the bank. So, I decided to start casting out in that area and we started getting bites on a more regular basis. But, still, we couldn't bring them in for one reason or another. It was beginning to make me mad, because these fish usually hook themselves and you have to practically pull their guts out to get the hook out of them. It may have been because we were using some older bait that wasn't quite as soft as the fresh stuff.

All the sudden, the wind picked up and it started to rain on us sideways. The wind was blowing so hard that it kept blowing my fishing pole off of the rock it was propped up on. It was miserable and cold and although I would have kept fishing if I'd have been alone, I figured we probably should should go because my son was shaking like a willow in the wind. It was extra hard to leave because the fish started biting like crazy when the wind picked up.

So, hey, the fishing at Foster can be pretty good in November!

Buy the good stuff here!
Email ThisBlogThis!Share to TwitterShare to FacebookShare to Pinterest