I've only started fishing as an adult a few years ago, but I've become kind of avid about it. Keeping 6 or 8 rods in my jeep at all times, just in case I get the chance, etc. So I organized a fishing trip with a couple of friends a couple of years ago. Lake Ayer, in New Hampshire. A house right on the lake for a week, brought my canoe and a whole bunch of fishing rods and tackle.

I spent most of the week fishing every chance I could. In the canoe, from the shore, wading around. The end of the lake that the house was on was quite shallow, and there were sand bars, so you could wade out 40 or 50 yards before the water got more than waist deep on me. In the canoe I would pick up lots of good-sized crappie, and wading I would look for bluegill. There was a cove right next to the house that was absolutely choked with weeds, except for the occasional open spot where a bluegill would have a nest, and I picked them up by the dozen, pulling the hook and letting 'em go.

Now, I saw bass everywhere, but I couldn't seem to catch one. They didn't seem to want anything I threw their way. Crankbaits, spinners, soft plastics, live bait.... nothing seemed to work. I managed to get one on the hook with a 4” curley-tail grub lure I was bouncing along the bottom, but I lost it just as it got to the canoe. I was a little desperate for a bass.

Towards the end of the week, we, as a group, decided to try whittling. For my first try, surprise surprise, I whittled a bobber. Slim and diamond shaped so it would flip up on the nibbles and be low drag when they took off with it. I put a small notch on one of the points to hook the line through, and I took it out to try it. Everyone else was eating dinner, so I just grabbed the rod I had been using for bluegill, and took a tub of trout worms from the fridge, and headed out to that cove next to the house.

Now, I should tell you about the set-up I was using. The rod is about 35 years old. It's mine from when my Dad used to take me fishing when I was a little kid. He didn't get me a toy rod, he got me something in the order of a 4 foot light/ultralight rod. It's so old and worn there are no markings on it anymore, so I can't tell you exactly what it is.

The reel is the one my Dad was using when he took me fishing back then. It's a 38 year old Garcia Kingfisher GK 200 that was slightly damaged in a house fire. I had replaced the drag cap with one that was almost right, and cut my own fabric washer for it. In other words, the drag was ...iffy. I've since re-built it with stock parts, and finding parts for a 38 year-old reel is a story in and of itself..... But anyway, I had put 2 lb mono-filament on it, and tied on a size 10 aberdeen hook, a wire hook so small and light it almost floats. I had crimped the barb to give the little buggers a chance and just used it for bluegill that week.

So, it was with this set-up in hand, with a trout worm on the tiny wire hook and a home-made bobber, that I waded out towards the weedy cove and cast for the edge of the weedline. The bobber splashed down and floated for a second or two. Just long enough for me to think hey, cool, it works, before it was pulled smoothly under the water.

“Hey, it does work!” I shouted as I snapped the rod tip up to set the hook. I started reeling in the line when I heard the zzzzzzzz.......zzzzzzzzzzzzzzz sound of line being pulled off the reel. Stupid drag, I thought as I started to screw the drag cap down tighter. I figured it had slipped again, and the bluegill was just zipping along with no drag at all. But while I was twisting the cap, out there by the cove, the fish surfaced. It kind of rolled to the surface and I saw one eye come out of the water before it slow rolled back beneath the water. A bass. A big one.

“Whoa...whoa...WHOA!” I yelled as I let up on the drag. A hook I could bend with my thumb on 2 lb line and a big bass.....not good! I held the rod up as high as I could over my head, so I could see exactly where it was, and I started running. With 2 lb line I couldn't muscle it out of the weeds, and I couldn't stop it if it just flat out ran straight away from me, so I knew I had to stay beside it and try to turn it. It was heading out to open water, so I ran that way, paralleling it and turning it gently towards me. It turned toward me, and then further, pulling a 180 and heading straight at the heavy weeds. I turned and ran back, as best I could through waist-deep water, trying to parallel it and turn it towards me again. It turned... and headed for open water again! I turned and started running again.

At some point during all this, I'm not sure when, I started to yell my fool head off. I was yelling to the house for someone to bring me a net, or a camera, or a tape measure, or a net, or a camera..... just yelling like crazy. I don't know how many times I ran back and forth, with the water going from waist-deep to knee-deep, back to waist-deep again, but my legs were tired and burning. I know I was running for somewhere between 10 and 15 minutes, and the bass was tiring too, swimming in shorter and shorter arcs. By now, my friends were out of the house and shouting encouragement to me. They also had a net, a tape-measure, a camera and a scale.

The bass made a last-ditch effort, and took off running... but it was running the wrong way. Straight toward the beach! I lumbered after it, my exhausted legs feeling like lead, reeling that line in for all I was worth. I kept it turned straight toward the beach, and it drove itself in to such shallow water it got stuck on the bottom! I put on a last burst of speed, such as it was, and thrust my hand in to the water to grab my prize by his lower lip. As soon as I had it, I dropped my rod in to the water so I could stick my other thumb in there as well, and get the fish in a two-handed grip.

I was yelling something, I believe it was “YES!! WOOHOOOOO!!!”, as I lifted my fish out of the water and over my head. I was doing the most tired little victory jig you ever saw. My friends were coming forward with the camera and the scale, and a couple who were in the house on the other side of that small cove were out on their deck giving me a standing ovation. They had been eating out there and seen the whole thing.

The bass wound up being 4 lbs 8 oz, the biggest I had caught up until then by a full pound. My little wire hook, the one with no barb on it had started to unbend under the constant strain, so it was very easy to remove. We weighed it, measured it, took a picture and I placed it back in the water. Moved it forward and back in the water for a second to revive it a bit and it took off for deeper water without looking back.

I've caught bigger bass since then. Good sized trout, a six lb salmon, quite a few stripers and nice blues, one of them 31 inches long. I have never had more fun catching a fish than that accidental bass on an old rod, with a mickey-moused reel, and a home-made bobber. I know guys who use the expensive stuff. Penn reels, St. Croix rods, custom made stuff. Sometimes they look at what I use and shake their heads. I shake mine right back. It's not the equipment, boys. It's the fish. It's the fishing. 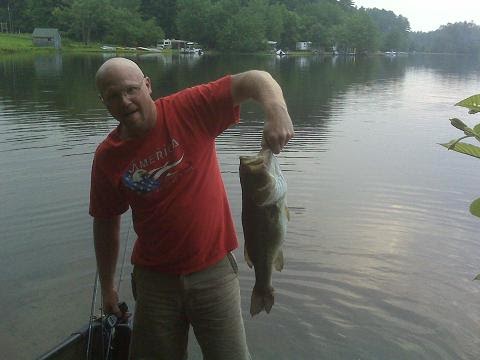