Hunting & Fishing Back in the Good Ol' Days

It is a wildlife world. Here is a picture of my father, Gerald P. Brewer, and some pictures of fish that were caught and deer that were harvested. My dad was a true outdoorsman. 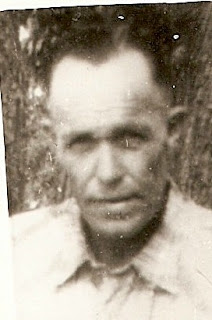 See that white shiny forehead. That is from wearing a felt cowboy hat from sunrise until sunset. With rolled edges and a sweat band that had evidence of many sweats that traveled up the crown and around the brim.

He was a father of 15 children. He was a sawmiller, logger, rancher, farmer, and many things in between. But he instilled in his family a love and respect for hunting and fishing.

For everyone of his sons and some of his daughters there are numerous adventure stories that could be published. One doesn't spend a lifetime in the forests and not have some very exciting and interesting stories.

I grew up listening to those stories and even being involved in some of them. We moved from Arizona to Colorado in 1959 and my dad bought a large ranch. On this property and adjacent forestland was abundant hunting and fishing.   The deer pictures were taken of animals taken on that property. 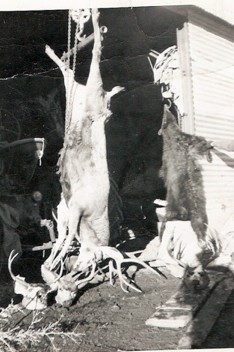 The fish pictures occurred in Arizona. With its many high country lakes provided two or three number 3 wash tubs of fish one summer for a community fish fry. 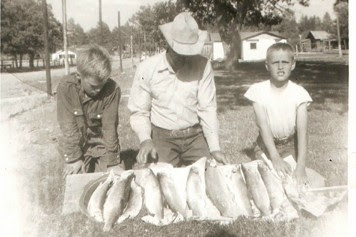 We had a 13 ft fiberglass boat which would hold as many people as we could put in it and still not get swamped. When the white caps came up in was an interesting scenario as we would wonder if we would stay afloat.

When we moved to Colorado a person with a deer permit could harvest 3 deer per season. Needless to say when deer season came around just when the harvest of crops were over and the cattle were brought in from the range and shipped to the auction yards, there was ample time to make plans for the fall deer and elk hunts.

Those crisp mornings with your breath showing itself and cool hands and fingers anxious for the sun to come up. To be in your places having trailed the horses up the trail-blazed by my father into the rough rocky bluffs and beautiful meadows where the Rocky Mountain Mule deer thrived.

My father did not hunt with abandon (recklessly charging through the woods) instead it was a calculated and investigated procedure. Having spent countless hours riding and walking through the area, he paid strict attention to detail (when a animal was jumped up, which way did it go, etc) The next time a drive was initiated in that area he had a plan that generally proved successful.

He was an excellent shot with a rifle. One morning I was sitting with him on a little projecting ridge across a dry was from the opening to a small canyon. Our other family members were making a drive and we were anticipating animals coming through that opening. Dad told me that he would shoot the first one in the head and the second one in the heart.

Well, I thought, "sure dad."  Anyways in a short while I heard the animals coming down the trail through the buck brush and then into the opening.

My father calmly aimed and fired. One animal down, and swinging onto the second animal which, by the way, was running parallel along the hillside, he then pulled the trigger the second time. The animal kept on running and I thought, "well, he missed that one."

Dad didn't shoot at it again, which I thought was odd. The animal ran about 40 yards and dropped. After further examination both animals were killed as my father had said.

Well I could write all day. But having experienced many wonderful events with hunting and fishing and then trying to pass this on to my own children has been some of the most memorable times in my short life. This bountiful earth has many wonderful, beautiful places and I have been blessed to enjoy the beautiful southwest and later in my life the northwest forests and meadows.


Thanks dad for pointing me down the right trails.

~Marshall
Email ThisBlogThis!Share to TwitterShare to FacebookShare to Pinterest