Striper fishing is something I am still getting used too. There is definitely a certain technique to it. I have a friend who is an expert at striper fishing and he was nice enough to invite me on a trip. Since it was a weekday I figured the river would not be that crowded.

When I arrived in the parking lot there were quite a few trucks with trailers parked. It was surprising how much traffic was on the water. We gathered our gear and launched the boat. This was the first time I've been to Weldon where you could see the rocks and rapids. The last few times the water was so high you couldn't see these rocks. 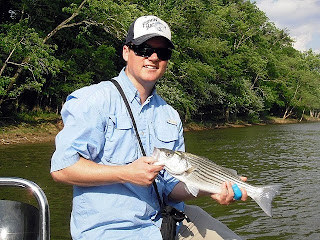 It didn't take long to hook into my first striper. The fly used was a tutti-fruity. The fly is a chartreuse and pink clouser.

We continued to drift without much success, so we decided to try the little river. After some wild life watching and good conversation. 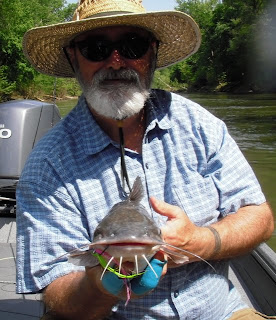 Jim hooked up with a fat catfish! It looked like it swallowed a softball.

A couple more fish were caught and we made our way to a usual hot spot. It was here that we spent the rest of the day. The fishing wasn't really hot but we were averaging a fish every 30min. I was starting to get the hang of how to catch the fish. It seemed quick strips with a short pause in between was best.

Jim was doing the same but with an even shorter pause. The retrieval really seemed to be the key more than what fly you used. We did have success on pink/white, green/white, green/yellow and some concoction I made. It is green and orange with a pink chenille body. More pics to come.

The highlight of the day came when Jim hooked up with a lunker. It was giving a nice tug on his 9wt rod so I figured it had to be a good fish. I asked if he needed the net and he responded with "OH YEAH!"

I could tell from how he was telling me what he was gonna do that he might not forgive me if I knocked the fish off. I ended up netting the fish fine! It was a fat 25-30 inch striper. It had a tag on it and we meant to get the number off for the fishing biologists but we didn't, and released the fish. 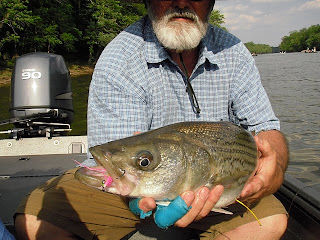 Maybe they would recognize the fish if we sent them the picture. They only tag a few thousand a year.

If you liked this article you might also like:
DVD Fishing For Stripers: Flatline Fishing an Umbrella Rig with Mack Farr