First Fishing Trip of the Year

I finally buckled down and purchased my fishing license last weekend.

It was $33, and that doesn't include my salmon/steelhead/sturgeon tag that I will need to purchase in the next month or two so that I can catch some Summer Steelhead on the Willamette River with my brother.

I had to take advantage of the drier weather last Saturday to mow the lawn, so my son and I didn't take off until about 3:30 pm.

We hopped in the fishmobile and drove down Hwy 20 towards our 'secret spot' at Foster Reservoir, near Sweet Home, Oregon.

As we were driving up the last hill, just before the lake came into view, I asked my son, "Do you think the water is going to be way down or way up?"

To this he answered, "I think it is going to be way down, daddy."

He was right, the water was very low. After I parked, we jumped out of the car and made the short but moderately treacherous trek down to the water's edge.

In short succession, I opened a bottle of green PowerBait, rolled some into a ball and gobbed it onto a size 18 treble hook. I cast it out in a likely looking spot, hoping to avoid getting snagged on one of the many stumps that line the bottom on the reservoir.

We rigged up the other rod with some orange PowerBait, cast it out nearby, and tried to get into a comfortable position to wait. 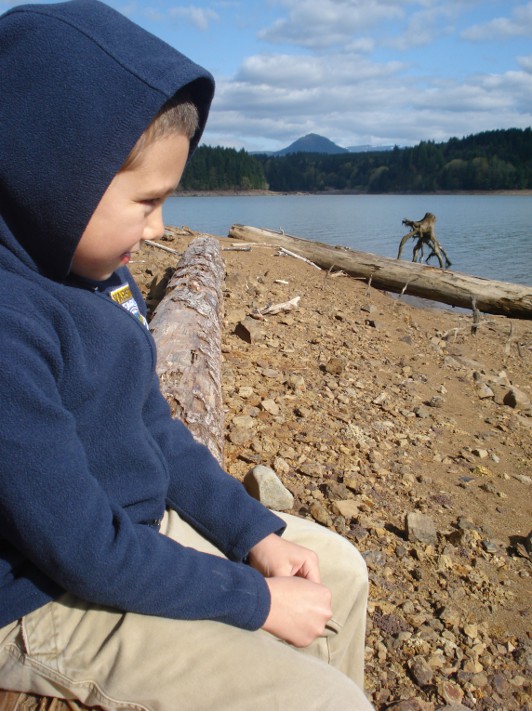 It didn't take long for my son's attention to turn to the many treasures to be found on the bottom of a reservoir. 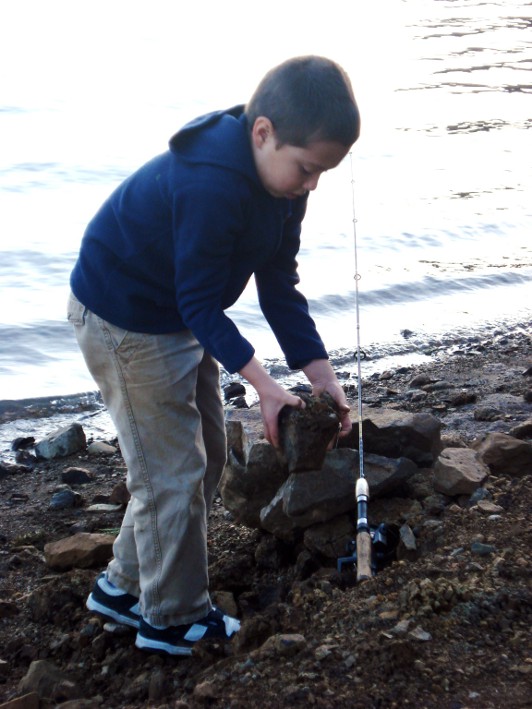 My son had a great time messing around in the mud and rocks. Rocks? Yep, he made sure to throw several of them into the water near our fishing poles.

I am slowly getting accustomed to the idea that he is in it for the fun, not just for the fish. I guess that's the way it was when I was his age too.

Don't get me wrong- if the fish start biting he will be there to reel them in. But for a seven year old, there is no fun in watching the end of the rod as it sits there motionless.

So he kept himself entertained with the next best thing- rocks and mud! Who can blame him?

Many of us who have kids occasionally find ourselves wishing we had the energy them little beggars have.This was one of those occasions.

We weren't getting any any action, so I reeled in to check the set-up and relocate the offering.

I relocated several times, covering a good 75-100 feet of bank at varying distances and depths.

Finally, as I began to reel in one time, I decided to stop reeling and let the bait settle to the bottom, about midway to shore. I got a solid little nibble, but missed the set.

Surely it was a little smallmouth bass, I thought, as they often hang out in the shallow flats.

The main quarry of the day was the rainbow trout that had been stocked recently by the Oregon Department of Fish and Wildlife, but I would settle for some smallmouthies.

So, I re-cast and hoped for the nibble again.

This time, the hook went home and I began reeling in my first fish of the year 2011.

I was surprised to see that it was a rainbow trout, at about 9 1/2 inches long. A real whopper.

My hopes of finding The One That Got Away were slowly fading in my subconscious mind.

The action continued to be slow, but we did get participation from two more fishy applicants- all on my rod. I let my son reel one in.

I caught the third and last fish of the day. After that, we continued fishing for a while, but there was no more action to be had.

It usually starts out that way at Foster in the afternoons. Very slow at first, and as the evening comes on, the fishing gets better.

It didn't quite work out that way this time. But we created another memory to cherish. 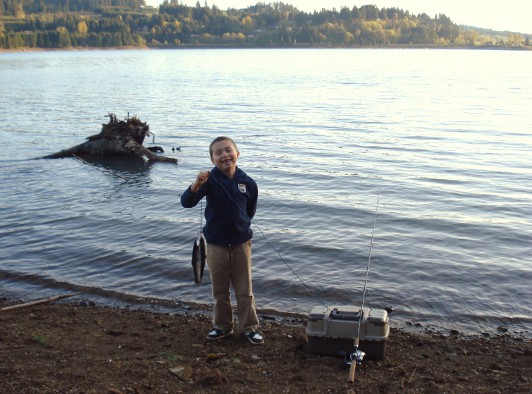 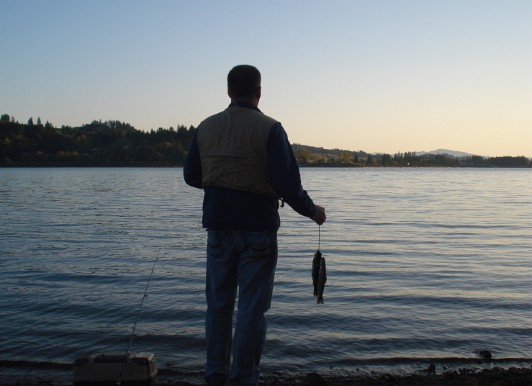 I'm going to call it a success! My son and I had a great time, and we had three delicious trouties to put on the grill.