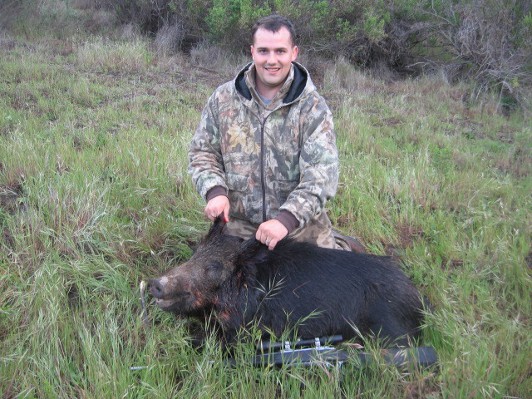 The plan was to wake up around 5:00 am, but my hunting buddy (since we were in 4th grade) Joe, hit the “snooze button” on his alarm. It wasn't until 5:30 am that he awoke me by opening my tuck door. I couldn’t understand a word he was saying other than we needed to hurry and get going.

It had been a sleepless night with the thunder, lighting, and the rain hitting my truck throughout night as I slept in the backseat, dreaming of killing my first wild hog.

I hustled to put on my camouflage in the tight space, then I jumped out of my truck to put on my boots. As I got out of the truck I looked up at the sky and saw that the nasty weather had changed and the sky was lit up with millions of beautiful stars.

We quickly made a plan for the day, and off we went. I followed Joe to our newly discovered hunting grounds. The sun was starting to turn the eastern sky red, with maybe 50 yards visibility. We got about a quarter mile away from where we were going to start walking when we saw a coyote run across the road and start moving through a field. I thought about shooting him, but due to it being so close to where we were hunting I kept the trigger finger at bay.

We made it about half of a mile to the top of the ridge where we could start glassing the canyon bottom. This was my first time in the particular part of the zone, and Joe was too busy telling me what he thought our next move should be and wasn’t glassing. So, I pulled my binoculars up and started picking apart every dark object I could see.

It wasn’t long before I came across two black objects in the middle of the meadow, down this draw about 800 yards away.

I took my binoculars from my eyes and thought for sure I was hallucinating. “Are those hogs?” I asked Joe.

He put his binoculars up, and after spending five days in this area all by himself without spotting a single pig, the tone in his voice when he replied was priceless “NO WAY... PIGS!!!!.

With the wind lightly blowing in our face, we quickly devised a plan to get within a comfortable range. They were making their way towards us into the heavy brush and if they made it in there the chances of getting one would be slim. Being in the military and training multiple days throughout the week, we knew we could close the distance.

We rushed down the ridgeline, losing sight of them for almost five minutes. We came to the top of the next ridge and spotted them again. Joe grabbed his rangefinder and whispered, “They're 375 (yards), we're within shooting distance”.

Being an avid bow hunter and having confidence on my stalking skills, I wanted to get a little closer. We hustled to get on the next ridge when all of a sudden a big doe jumped out of nowhere; she was bounding right at the pigs. My heart sank as I thought my opportunity was coming to an end.

As I crept over the hill I looked down and the pigs were still there. My adrenaline started pumping when Joe ranged them again and whispered the words “150”. They were below me in the bottom of the ravine, still walking towards the sagebrush. I told Joe I would shoot the first one.

At that moment the world stood still, I took a sitting rest and pulled up my .270 Remington, awaiting the right opportunity to send that 130 grain bullet at my first hog.

At this point all communication between Joe and I was over. The pig was still moving so I put the crosshairs of my Leupold Game Tracker 3 scope on the wild hog’s neck, slowly squeezing the trigger.

Through the scope I watched as the wild pig fell in its tracks. Joe attempted to get a shot on the other pig, but it made its way into the brush before he could connect on a shot.

With my heart pumping and adrenaline rushing, the 150 yards seemed like only feet until I was looking at my first ever wild pig, MY TROPHY.

It was pure excitement and joy. A couple of pictures were taken, and the work to pack out the 140 lb sow began.

Hunting is not only about the kill, it’s about the ups and down you go through to get your quarry. It’s about spending time with friends, family, and loved ones in the wild, away from most technologies.

We have put in over 50 miles of hiking, numerous hours of driving, staring at maps, and looking through the binoculars. I enjoyed every moment of it.

Special thanks to my hunting partner, Joe Mello, who has been with me to scout and learn how to hunt the wild pigs.